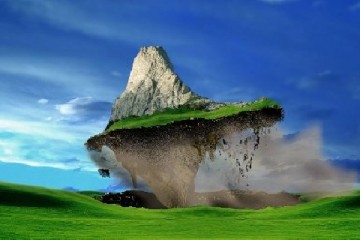 Many of us have heard the old idiom, “If God is all powerful can He make a mountain so big that He can’t move it?” Though this is a riddle to try and make people question the idea of an all-powerful God, it also serves to show in a simple way that God cannot do “whatever He wants”.  This idea, popular even amongst Latter-day Saints, purports, “Who am I to tell God what He can or can’t do? He’s God, He can do anything”. There are several instances throughout holy writ that show that if God were to do “X” He would “cease to be God”. This shows that He cannot do whatever He wants and continue to be God.

Therefore, there are certain things that must be done here on Earth, preferably, during our lifetime to receive our exaltation.  If there was some way that our Father could negate that, and give us our unearned exaltation, He would lose His.  He would cease to be God.

Can God change the law to insure He is not breaking it?

“For God doth not walk in crooked paths, neither doth he turn to the right hand nor to the left, neither doth he vary from that which he hath said, therefore his paths are straight, and his course is one eternal round.”  (D&C 3:2)

Moroni expounds upon this and states,

“And if there were miracles wrought then, why has God ceased to be a God of miracles and yet be an unchangeable Being? And behold, I say unto you he changeth not; if so he would cease to be God; and he ceaseth not to be God, and is a God of miracles.” (Mormon 9:27-28)

God cannot violate eternal laws without losing His station, nor can He change the laws.  He is bound to what always has been, and what always will be, no matter how much we kick and scream about it.

Another popular argument claims that, “Since the Savior came to fulfill the Law of Moses, surely Gods laws change depending upon the era”.

Moroni debunks this falsehood and says:

“And again I speak unto you who deny the revelations of God, and say that they are done away, that there are no revelations, nor prophecies, nor gifts, nor healing, nor speaking with tongues, and the interpretation of tongues; Behold I say unto you, he that denieth these things knoweth not the gospel of Christ; yea, he has not read the scriptures; if so, he does not understand them. For do we not read that God is the same yesterday, today, and forever, and in him there is no variableness neither shadow of changing? And now, if ye have imagined up unto yourselves a god who doth vary, and in whom there is shadow of changing, then have ye imagined up unto yourselves a god who is not a God of miracles” (Mormon 9:8-10)

“He (God) set the ordinances to be the same forever and ever, and set Adam to watch over them, to reveal them from Heaven to man, or to send angels to reveal them.” (Teachings of the Prophet Joseph Smith, pg. 168)

Now you might argue, “But we are not commanded to build an ark in this day!  Surely there are different rules for different people; that is why we have continuing revelation!”  We must understand though, that there is a difference between a commandment and an eternal law.

A clarification may be found here, wherein the Prophet Joseph said,

“We have sufficient grounds to go on and prove from the Bible that the gospel has always been the same; the ordinances to fulfill its requirements, the same, and the officers to officiate, the same; and the signs and fruits resulting from the promises, the same: therefore, as Noah was a preacher of righteousness he must have been baptized and ordained to the priesthood by the laying on of the hands” (Teachings of the Prophet Joseph Smith, pg. 264).

Though we are not commanded to build an ark as Noah was (a specific commandment for a specific person at a specific time), baptism is required by all, from Adam to our time.  Even our Savior had to obey – again showing that God (or any member of the Godhead) is not exempt from laws that have been around long before He reached His Celestial throne, and of which He cannot allow His children to negate if they are to follow in His footsteps.

The Prophet Joseph also explained the importance of understanding this when he said,

“But it is equally as necessary that men should have the idea that he is a God who changes not, in order to have faith in him … for without the idea of unchangeableness in the character of the Deity, doubt would take the place of faith. But with the idea that He changes not, faith lays hold upon the excellencies in His character with unshaken confidence, believing He is the same yesterday, today, and forever, and that His course is one eternal round.”(Lectures On Faith, 3:21-22)

Knowing that “…the course of life which [we are] pursuing, is according to his will” is essential if we are to “exercise faith in God unto life and salvation” (LOF 3:5, 2).

“…because without this, he would not know how soon the mercy of God might change into cruelty, his long suffering into rashness, his love into hatred, and in consequence of which doubt, man would be incapable of exercising faith in him, but having the idea that he is unchangeable, man can have faith in him continually, believing that what he was yesterday he is to day, and will be forever…  for unless men have this idea they cannot place confidence in his word, and not being able to place confidence in his word, they could not have faith in him; but believing that he is a God of truth, and that his word cannot fail, their faith can rest in him without doubt.” (LOF, pg. 43)

The Book of Mormon, whose major purpose is to bring us to Christ, is THE book that reveals to us that God cannot “do whatever he wants”; that even He must obey certain laws, or He will cease to be God (Mormon 9:19, Alma 42:13, Alma 42:22, Alma 42:25).  This does not dethrone God, nor does it take away any of His power or authority, but it shows us the way to return to Him, to become like He is and as the Gods are.