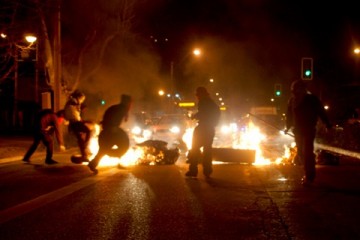 When the people commence to look to the federal government for their support, and if they don’t receive what they feel they are entitled to, they will strike against the power which is withholding that to which they consider themselves entitled. Just as in times past, men have struck against the companies who gave them jobs and provided them with a livelihood when they felt they were entitled to higher wages or shorter hours.

In both cases the recipients are not grateful for what they are receiving. They are angry because it isn’t more. The difference lies in this: When the strike is against a private company there is an independent unbiased police force to maintain peace and arbitrate the case in court, but where the government is one of the parties to the dispute there is no appeal to anything except force.

The employees can come to hate the government and its officers just as they come to hate the company and its officers when the law is not based upon moral principle. When the law can no longer appeal to either reason or justice, and where it is nothing more than a power which takes what is available and dispenses it with an arbitrary hand, with no fundamental principle to guide it in saying how much is to be given to which group, people lose respect for such a law and the police power which enforces it. No appeal to justice, reason, or compassion will prove effective. The people who are the backbone of civilized nations—the thrifty, hardworking self-respecting independent honest class—cannot respect such a law.

Where the right of private property is protected man is encouraged to look to himself to supply his wants. He is even forced to this just as nature and nature’s God decreed: Thou shalt eat thy bread by the sweat of the face. But when government announces that it will now see to it that his wants are supplied, he no longer feels the need to rely upon his own brains and body. That man loses respect for the rights of others. He looks to the use of force to provide for his needs. He looks to force which takes from others what they have created, and the more he is pampered the more he demands. He comes to believe what the government tells him: That there are no property rights which may not be invaded to provide for his wants. He no longer regards it as necessary to conserve and limit his desires or to save and provide for the future. In our complex economy this is the worst possible attitude, for when it breaks down the suffering will be most intense.

When a government encourages and advocates the belief that force may be used by groups, acting together through government to despoil others of their property, the reliance upon force becomes accepted. As the reliance upon force becomes accepted and as the numbers increase who depend upon government largesse, the greater becomes the problem of restraining this group when government can no longer supply their demands. The government must resort to force to keep them in place when their demands reach that point (which they soon will), where it is impossible to give them what they ask. Civil war will occur just as it did in Rome.

There are always large numbers in any society who are industrious and thrifty and who respect the rights of others to own and control property. These people know within themselves that it is morally wrong for the government to take from them the fruits of their own labors and saving practices and give to those who won’t work and won’t save. As the immoral practice of government grows, disrespect

for law also grows. They no longer can be counted on to uphold and obey a law they know is immoral and is at variance with their conscience. The foundation of any stable government is respect and voluntary obedience by the masses of the people. When this is destroyed, free government is no longer possible and dictatorship becomes the only answer. Such a form of government must resort to a policy of foreign war to keep the people united in any respect. They must conduct a war against some real or imagined foreign government and cry danger in order to get any support.

In such a government only the corrupt will accept positions of responsibility, or those who are so blind that they are unable to see the perversion of government. Such a group will not scruple to stay in power. The love of power becomes the dominant aim in their lives. No means is too devious or too reprehensible. They will use force, lies, bribery, murder, and imprisonment to hold their opponents in check.

The loss of political and economic freedom is an inevitable consequence of socialism. Self-government becomes impossible because centralized planning displaces all local planning. As immorality grows apace, the people are unable to act in concert in sufficient numbers to put respectable and moral men in office. Each group is striving to protect its own selfish and government protected interests. Any man who stands up and says this is all wrong is vilified, maligned, and literally torn to pieces by the mobs who want government to continue to protect their labor monopoly, business monopoly, subsidy, welfare check, etc.

The moral element, seeing that it is impossible to restore government to its proper function, begins to plot its violent overthrow. This is the only recourse they have. Appeal to the ballot box is futile. Death is preferable to slavery to them. If there are no moral reference points, then government becomes nothing more than an instrument of force which treats man as if he were just another beast of burden. Not only does the government presume to own and control all land and natural resources, but it arrogates unto itself the power to treat each citizen’s labor as its own, to dispose of as it pleases, and even to direct what labor shall be performed.

33 thoughts on “The Coming Civil War”