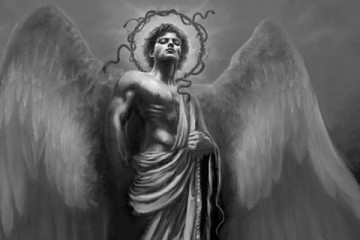 This article has been translated into French

You are probably familiar with the story of the War in Heaven and the pre-mortal Council?

“And there was war in heaven: Michael and his angels fought against the dragon; and the dragon fought and his angels, And prevailed not; neither was their place found any more in heaven. And the great dragon was cast out, that old serpent, called the Devil, and Satan, which deceiveth the whole world: he was cast out into the earth, and his angels were cast out with him (Revelation 12:7–9).” (James J. Hamula, “Winning the War against Evil,” Ensign, Nov 2008, 50–53)

“…That Satan… is the same which was from the beginning, and he came before me, saying — Behold, here am I, send me, I will be thy son, and I will redeem all mankind, that one soul shall not be lost, and surely I will do it; wherefore give me thine honor. But, behold, my Beloved Son, which was my Beloved and Chosen from the beginning, said unto me — Father, thy will be done, and the glory be thine forever. Wherefore, because that Satan rebelled against me, and sought to destroy the agency of man, which I, the Lord God, had given him, and also, that I should give unto him mine own power; by the power of mine Only Begotten, I caused that he should be cast down;” (Moses 4: 1–3)

How was it that Lucifer’s argument was so compelling and appealing that a third of the hosts of heaven followed Lucifer (1) (2), knowing that they would be cast out of Father’s presence.

I believe the answer is found in examining how Satan, appearing as an angel of light, is also deceiving many today. Satan’s argument in the war in heaven must have seemed so good, so true and right that his followers honestly believed it was the better way – after all, these were spirits who dwelt in the presence of God, the Father; they are his children. Even today Satan continues to deceive, causing many, even those professing to follow Christ, to embrace false principles, and to call evil good and good evil.

Usually when we think of the temptations of the devil, it is in regards to doing that which the world commonly recognizes as bad, such as stealing, lying, murder, and all manners of vices. What is not as frequently spoken of, and often unrecognized, is how Lucifer is deceiving people today, appearing as an angel of light.

Satan’s deceptions in this manner are often confused as being good, yet one of the keys in recognizing such deceptions is that these paths do not lead to Christ. For there is only one path to Christ and it is straight and narrow.

To give you a better understanding and to lead you on a path to show you how Satan deceives people, like unto an angel of light, I will refer to the following articles from fatherthywillbedone.com:

For Lucifer or any of his followers to transform themselves to appear as angels of light they must use truth mixed with falsehoods. The greatest lie is truth that is twisted. So yes much of what they may say “appears good” yet is truly evil at its core… Read more.

How to Boil a Frog: Lucifer Turns up the Heat

Most of us have heard a metaphoric story regarding a frog and boiling water that goes something like this… …This is how Lucifer operates… Read more.

The Law of Attraction is Not the Law of the Harvest, Restoration or Faith

33 thoughts on “Have You Been Deceived by an Angel of Light?”