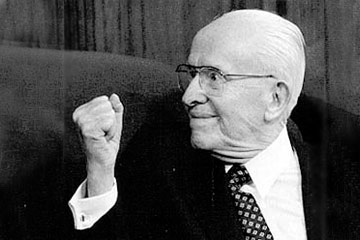 It is a common assertion, in an attempt to discredit any of his teachings, that President Ezra Taft Benson “mellowed” on his teachings against Conspiracy and in defense of liberty.  His detractors claim that he did not teach those things once he became President of the Church of Jesus Christ of Latter-day Saints and therefore he must have changed his views, making his old views null and void.

This idea is one that is not only prevalent amongst more statist members of the Church, but also among many that consider themselves liberty lovers.  This I cannot understand.

Of the things he wrote, and based on the talks that he actually gave, he was a defender of liberty and a warrior against conspiracy until the very end.

One of the first books that Ezra Taft Benson wrote as President of the Church was “The Constitution: A Heavenly Banner” (recently back in print and available through Amazon.com). It contains some of the strongest defenses of limited government and warnings against the dangers of statism by any modern leader of the Church, perfectly consistent with his teachings as an Apostle.

In it he reiterates the proper role of government, the source of rights, principles of agency and compulsion, the divinity of the Constitution, warns of the erosion of liberty, and so much more.

In 1987, President Benson gave a talk in General Conference entitled “Our Divine Constitution“, in which he reiterates many of the same points, as well as others in the strongest of terms.

In one of the dedicatory sessions of the Portland Oregon Temple he warned those in attendance of Secret Combinations.

In his book “A Witness and a Warning” (available at Amazon.com), President Benson gave very strong warnings about modern day secret combinations.

In his final address to the members of the Church, considered his final testimony, Ezra Taft Benson, testified of the principles of Liberty, Secret Combinations, and of the very real threats to freedom:

“I testify that America is a choice land. (See 2 Ne. 1:5.) God raised up the founding fathers of the United States of America and established the inspired Constitution. (See D&C 101:77–80.) This was the required prologue for the restoration of the gospel. (See 3 Ne. 21:4.) America will be a blessed land unto the righteous forever and is the base from which God will continue to direct the worldwide latter-day operations of His kingdom. (See 2 Ne. 1:7.)… I testify that wickedness is rapidly expanding in every segment of our society. (See D&C 1:14–16; D&C 84:49–53.) It is more highly organized, more cleverly disguised, and more powerfully promoted than ever before. Secret combinations lusting for power, gain, and glory are flourishing. A secret combination that seeks to overthrow the freedom of all lands, nations, and countries is increasing its evil influence and control over America and the entire world. (See Ether 8:18–25.)” (Source: “I Testify“, General Conference, October 1988)

Until the very end of his personal ministry President Ezra Taft Benson testified nobly and boldly of Liberty and the threats to it, backing all of it up with strong scriptural foundations.