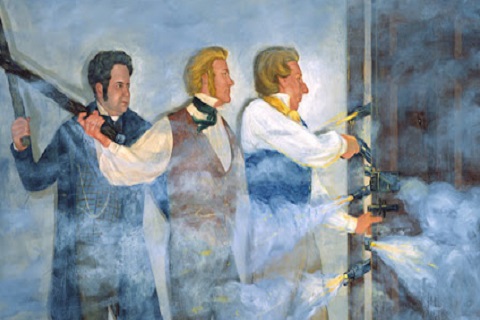 “Here is one principle which is eternal; it is the duty of all men to protect their lives and the lives of the household, whenever necessity requires, and no power has a right to forbid it, should the last extreme arrive.” (Joseph Smith, HC 6:605.)

In 2013 the Utah legislature passed HB76, restoring the protection of the right Joseph said no one had the right to forbid.

Secular arguments for the support of protecting the right to arms from the founding fathers to statistics that show states with fewer gun laws are safer than those without, or that 8 states already have “Constitutional carry” are redundant by now. However, the real question is “what have Church leaders said about it?”

Heber C. Kimball taught, “It is also for your salvation to equip yourselves. … Now, I will tell you, I have about a hundred shots on hand all the time,—three or four fifteen-shooters, and. three or four revolvers, right in the room where I sleep; and the Devil does not like to sleep there, for he is afraid they will go off half-cocked. If you will lay a bowie knife or a loaded revolver under your pillow every night, you will not have many unpleasant dreams, nor be troubled with the nightmare; for there is nothing that the Devil is so much afraid of as a weapon of death. … Let us be ready, guns cocked; none of your half-cocked.” -JD 5:164-165

This is exactly the principle that Brigham Young said protected the people from the murderous mobs, “By what means did [God] keep the mob from destroying us? It was by means of being well armed with the weapons of death to send them to hell cross lots. Just so you have got to do. As for this people fostering to themselves that the day has come for them to sell their guns and ammunition to their enemies, and sit down to sleep in peace, they will find themselves deceived, and before they know, they will sleep until they are slain… We must be so prepared that they dare not come to us in a hostile manner without being assured they will meet a vigorous resistance, and ten to one they will meet their grave. … Let this people here lie down to sleep, and be entirely off their watch, and the first thing they know, they are in the greatest danger. You must not desert the watch tower, but do as I do—keep some person awake in your house all night long, and be ready, at the least tap of the foot, to offer a stout resistance, if it is required. Be rely at any moment to kill twenty of your enemies at least. Let every house be a fort. … I am my own policeman, and have slept, scores of nights, with my gun and sword by my side, that is, if I slept at all. I am still a policeman. Now is the day to watch. It is as important for me to watch now, as well as pray, as it ever has been since I came into this kingdom. It requires watching, as well as praying men; take turns at it, let some watch while others pray, and then change round, but never let any time pass without a watcher, lest you be overtaken in an hour when you think not; it will come as a thief in the night. Look out for your enemies, for we know not how they will come, and what enemy it will be. Take care of yourselves. … Take care of your grain, and take care of yourselves, that no enemy come to slay you. Be always on hand to meet them with death, and send them to hell, if they come to you. May God bless you all. Amen.” -JD 1:171-172

“We all believe that the Lord will fight our battles; but how? Will He do it while we are unconcerned and make no effort whatever for our own safety when an enemy is upon us? If we make no efforts to guard our towns, our houses, our cities, our wives and children, will the Lord guard them for us? He will not; but if we pursue the opposite course and arrive to help Him to accomplish His designs, then will He fight our battles. We are baptized for the remission of sins; but it would be quite as reasonable to expect remission of sins without baptism, as to expect the Lord to fight our battles without our taking every precaution to be prepared to defend ourselves. The Lord requires us to be quite as willing to fight our own battles as to have Him fight them for us. If we are not ready for an enemy when he comes upon us, we have not lived up to the requirements of Him who guides the ship of Zion, or who dictates the affairs of his kingdom.” (Brigham Young, JD 11:131.)

UPDATE:  Governor Gary Herbert vetoed HB76 March 22nd 2013.  HB76 passed the House and Senate with veto proof majorities, yet they were too cowardly to do their duty and refused to override the governors tyrannical veto. You can find out who your legislator is here