Some key points on that principle are found in the Council of Fifty minutes as well as in later teachings:

“Willard Richard’s query as to whether there was a difference between the church and the kingdom sparked lengthy discussion. JS [Joseph Smith] then explained that the two were distinct, as the church was not designed to ‘govern men in civil matters’ and the kingdom was ‘not designed to effect our salvation hereafter”18 April 1844, Joseph Smith Papers, Administrative Records , Council of Fifty Minutes March 1844-January 1846, page 108

“We have been taught from the beginning this important principle, that the church of God is distinct from the kingdom of God. Joseph gave us the pattern before he died. He gave his brethren an example that has not been forgotten to this day. He impressed it upon them, that men, not members of the church, could be members of the kingdom that the Lord will set up when he reigns. He picked out the youngest among them, and told them to be sure and remember this. In the midst of all of us who understand this matter there is a clear distinction between the church in its ecclesiastical capacity and that which may be termed the government of God in its political capacity.” George Q. Cannon, Juvenile Instructor 31:140

“This (the Church) is what we are in the habit of calling the Kingdom of God, but there are further organizations. The Prophet gave the full and complete organization to this kingdom the spring before he was killed. The kingdom is the Kingdom Daniel spoke of, which was to be set up in the last days… I shall not read you the names of the member of this kingdom, neither shall I read to you its constitution; but the constitution was given by revelation” Brigham Young, Journal of Discourses 17:156

This is a literal kingdom, not a figure of speech or something not of this world.

“Let us now notice our political position in the world. What are we going to do? We are going to possess the earth. Why? Because it belongs to Jesus Christ, and he belongs to us, and we to him. We are all one, and will take the kingdom and possess it under the whole heavens, and reign over it forever and ever. Now, ye kings and emperors, help yourselves, if you can. This is the truth, and it may as well be told at this time as at any other.” John Taylor, Journal of discourses 1:230

The purpose of this organization is explained by the Prophet when he said,

“I organized into a special counsel to take into consideration the subject matter contained in the above letters, and also the best policy for this people to adopt to obtain their rights from the nation and secure protection for themselves and children; and to secure a resting place in the mountains, or some uninhibited region, where we can enjoy the liberty of conscience guaranteed to us by the Constitution of our country.” Joseph Smith, history of the church, page 260- 261, Millennial Star 23:1119

The Lord further explained the purpose of the Kingdom in a revelation to John Taylor,

“I have established my Kingdom to be a shield and protection to my Church, to learn and comprehend my law, and to carry out my purposes, that my will may be done on earth as it is done in heaven: The Church through the law and Spirit of the Gospel to preserve the virtue and purity of the Kingdom; And the Kingdom to preserve and protect the Church from the aggressions of the wicked and ungodly.” June/July 1882, John Taylor papers, LDS Historians office

We have to work to establish it, the Lord will not do it for us,

“the kingdom of God … is to become a political power, known and recognized by the powers of the earth; and you, my brethren, may have to be sent forth to represent that power as its accredited agents.” George Q Cannon, Millennial Star, 24:103

“If the Saints possess the kingdom I think they will have to take it; and the sooner it is done the more easily it is accomplished.” Joseph Smith, History of the Church 6:372

Revelation continued to guide the Kingdom well after the death of the prophet Joseph Smith.  In 1882, the Lord told the Council through John Taylor,

Thus saith the Lord God who rules in the heavens above, and in the earth beneath: I have introduced My kingdom and My government, even the kingdom of God that My servants have heretofore prophesied of–And that I taught My disciples to pray for, saying,

“Thy kingdom come, Thy will be done on earth as it is in heaven. For the establishment of My rule, for the introduction of My law, for the protecting of My church, and for the maintenance, promulgation, and protection of civil and religious liberty in this nation and throughout the world.” 27 June 1882, John Taylor Papers, LDS historians office

Shortly before the assassination of Joseph Smith, the Council of Fifty attempted to adopt a Constitution by revelation with a preamble co-authored by John Taylor which read in part,

We, the People of the Kingdom of God, knowing that all power emanates from God, that the earth is his possession, and he alone has the right to govern the nations and set in order the kingdoms of this world; that he only has a right to institute laws and establish decrees for the government of the human family; that he is our Father in heaven; and we, his legitimate children, inhabiting his footstool, and that no rule, law, government, Dominion or power, unless instituted by him, can be productive of the greatest happiness, prosperity, exaltation and glory of his subjects:- And knowing also that none of the nations, kingdoms or governments of the earth to acknowledge the creator of the universe as their Priests, lawgiver, King and Sovereign, neither have they sought under him for laws by which to govern themselves;- And knowing also, that there is not an original kingdom on the earth that holds the rightful authority from the king of Kings and Lord of Lords, to govern his subjects: but that all the nations have obtained their power, rule and Authority by usurpation, rebellion, bloodshed, tyranny and fraud:-

And knowing also, that no government, which has thus originated, has the disposition and power to grant that protection to the persons and right of man, viz. life, liberty, possession, of property, and pursuit of happiness, which was designed by their creator to all men; …And having sought in vain among all the nations of the earth, to find a government instituted by heaven; an Asylum for the oppressed; a protector of the innocent, and a shield for the defenseless:- an impenetrable Aegis for the honorable of all nations; uncorrupted by the usurpation’s of designing men the contaminating influence of the love of Gold, and the lawless intrigues of aspiring demagogues:- unfettered by unrighteous legislation, and untrammeled by the mandates of an unjust judiciary; not degraded by a superstitious or religious influence: A Realm where liberty spreads undivided and operates unspent; and where truth and virtue are the centre and circumference of the nation; are as enduring as the hills of eternity, and as omnipotent as the voice of Jehovah:- To hasten the accomplishment of his purposes: To fulfill the predictions of the prophets to establish a pure government; to lift up an ensign to the nations, and establish a standard for all people, that the strength, and the power, and the glory, and the exaltation, and the kingdom, and the dominion under the whole heavens, may become the kingdom of our God and of his Christ, as has been predicted by all the holy prophets since the world began, to be brought to pass on the earth in the last days… and where the supreme law of the land shall be the word of Jehovah”

This topic being of such grand importance, and with the need to spread these principles far and wide, we have produced a limited number of high quality canvas like prints of the proposed Constitution of the Kingdom of God in full. We hope that in your home, this piece will provide in-depth and substantive conversations about the Kingdom of God, what it is, and how we can help build it. For as John Taylor warned,

Kingdom of God Constitution’s can be ordered here 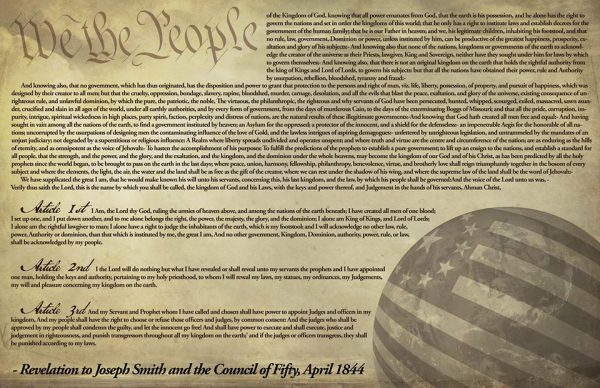 3 thoughts on “What Do You Know About The Political Kingdom Of God?”