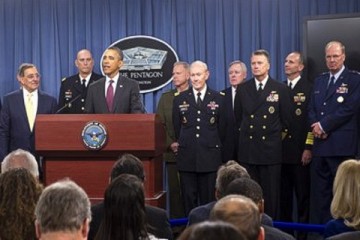 Editors note: This talk was originally given by President J. Reuben Clark Jr., 14 Nov 1947 and appeared in the Church News 22 Nov 1947.  It has been edited for space, but can be found in full in chapter 6 of “Stand Fast by the Constitution” under the chapter heading, “Let Us Have Peace”.

Peace has been the pearl of great price, coveted, searched for, by man during all the ages.

I regret to say, indeed I am almost ashamed to say, that at the moment, our military branches seem in almost complete control of our own government.  They appear to dominate Congress, and under the circumstances, we may assume they are in sufficient control of our foreign relations to be able to set the international scene. To us who do not know, it looks clear that we are today getting the same sort of propaganda of half-truths, told in the same evasive ways, with equivalent hints and dark forebodings that preceded the last war.  We are not justified in doubting, on the facts, we have, that we of the United States are, for the first time in our history, under a real threat from our military arm, and that if the plans of the militarists carry, we shall become as thoroughly militarized as was Germany at her best, or worst.  Certain it is we are being generously dosed with that sovereign narcotic, which designing militarists have in the past always administered to their peoples, the doctrine that to ensure peace we must maintain a great army and gigantic armaments.  But this ignores, indeed conceals, the unvarying historical fact that big armies have always brought, not peace, but war which has ended in a hate that in due course brings another war.

Our militarists will no more be able to let a great army lie unused than they were able to withhold the use of the atom bomb once they had it, even though some military men are now quoted as saying the war was won before the bombs were dropped on Nagasaki and Hiromshima.  Under the threat that Germany was perfecting such a bomb, we were justified in perfecting ours.  But it may well be a disaster to civilization for us unnecessarily to have initiated its use.  Some of us think it was shameful.

All this is not the way to peace, but to war.

The international gospel of the Founding Gathers was forecast by Jefferson in 1793.  It was voiced by Washington in his farewell Address in 1796, when he declared we should have “as little political connection as possible with Europe,” because Europe had a “set of primary interests” with which we had “none or a very remote relation,” wherefore “must be engaged in frequent controversies, the causes of which are essentially foreign to our concern;… why, by interweaving our destiny with that part of any part of Europe, entangle our peace and prosperity in the toils of European ambition, rivalship, interest, humor, or caprice?  It is our true policy to steer clear of permanent alliances with any portion of the foreign world.”  The Monroe Doctrine declaring against the future colonization of the American continent by Europeans, against the extension therein of there political system, against interposition by European powers to control the destinies of the Latin Americas, implemented the principles of the Address.  And Jefferson, commenting in 1823 on the Monroe doctrine, and the complete political separation of Europe and the Americas, solemnly affirmed: “Our first and fundamental maxim should be, never to entangle ourselves in the broils of Europe; our second, never to suffer Europe to intermeddle with cis-Atlantic affairs.”

Nor may we overlook that great doctrine of neutrality set up under Washington himself and Jefferson and Hamilton, which was aimed at and brought about the localizing of international armed conflicts, and the preservation, under prescribed rules, of peacetime intercourse between belligerents and nonbelligerents.  War was to curse as few people as possible.  This has been jettisoned for the concept that every war should involve all nations, making all suffer the ravages of a global war.

Until the last quarter of a century, this gospel of the Fathers was the polar star by which we set our international course.  In the first hundred thirty years of our constitutional existence, we had three foreign wars, the first merely the final effort of our Revolution, which made good our independence.  During the century that followed we had two foreign wars, neither of considerable magnitude.  During the next twenty-three years, we had two global wars.  While the gospel of the Gathers guided us, we had peace.  When we forsook it, two great wars engulfed us.

What has our apostasy from peace cost us?

In spiritual values it has brought great numbers of our youth and older men to the very depths of desponding atheism.  Our whole social structure seems undermined.  We are becoming a blaspheming, unchaste, non-Christian, Godless race.  Spiritually we seem ripe for another war.

In values of government and law, these wars and the intermingling’s of men of different concepts of freedom and human rights, have brought into our own system, the despotic principles of European systems, against which the Fathers warned, though they came to us through doors the Fathers did not see.  Many and influential persons amongst us, of alien concepts and sometimes of alien birth, no longer admit that man possesses  the inalienable rights of the Declaration of Independence and the fundamental precepts of the Constitution.  Our courts no longer guarantee these rights and enforce these principles.  We have and are aping and adopting the policies and the legal theories of Europe.

It is time we returned to the political faith and work of the Fathers.  It is indispensable that we do so if we are to have peace.  I believe in the old faith and the old works, under which we had so much of peace.  I am a political isolationist in the full sense of the term and am not fearful in declaring it.

I am a political isolationist because:

I fully believe in the wisdom of the course defined by Washington, Jefferson and other ancient statesmen.  The whole history of America before and since the Revolution proves the truthfulness of their assertions.  All during our pre-Revolutionary history we were at war, we were robbed, plundered, and massacred because of European wars, in the issues and causes of which we had no concern.  History is repeating itself.

I believe American manhood is too valuable to be sacrificed on foreign soil for foreign issues and causes.

I believe that permanent peace will never come into the world from the muzzle of a gun.  Guns and bayonets will, in the future as in the past, bring truces, long or short, but never peace that endures.

I believe that moral force is far more potent than physical force in international relations.

So the light of the Master will ultimately break through the darkness of the infidel, and all men will return to freedom and free institutions and to the worship of Almighty God, for such has been the course of man since He came to this earth, and ultimately every knee will bow and every tongue confess that Jesus is the Christ, and then will come the peace of the world.

Meanwhile, let us each set his own house in order.  Let us each do a little repenting of our common sins.  Let us each recast his own life to fit th example and teachings of the Master.