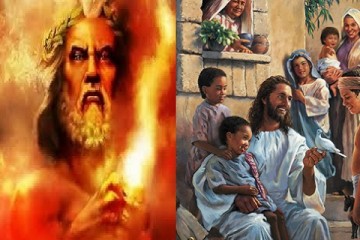 One of our Articles of Faith says:

We claim the privilege of worshipping Almighty God according to the dictates of our own conscience, and allow all men the same privilege, let them worship how, where, or what they may.

That is the expression of a great principle, a principle that has been operative among the children of God from the earliest period of which we have any record. It was pursuant to that principle, and in the exercise of the rights guaranteed thereby, that a third of the hosts of heaven revolted, in an effort to overcome the plan which God adopted. Personally, I would not in any way, and in the lightest or slightest degree, hamper anyone’s free agency. Literally, I feel and believe that men should worship how, where, or what they may. That is the spirit of the priesthood, the priesthood which we hold. The priesthood never compels. God himself does not compel the intellect, nor does he attempt to overthrow it.

If I might be specific, I would like to say how different is that principle from the principle of a great church which says, or has its presiding officers say in the oaths that they take, that they will attack and follow up all heretics, and over the centuries they have made good that oath.

The Lord has told us in the scriptures that in the last days there will be two churches. John the Revelator spoke of the great church with worldly power that had under its dominion and leadership the kings of the earth—he spoke of it as Babylon, the Mother of Harlots; and Nephi spoke of it as the great and abominable church. I am not going to say what that church is, though I have a very definite and clear idea. But I want to say that those scriptures also tell us that the other church is a weak church, a church to whose assistance God has to come in order to preserve it. We certainly are not the great church, for no kings are tied to the chariot wheels of our Church. We are the other church.

Now, our enemies are seeking to attack and are attacking our Church. Time does not permit me to read all the scriptures that I have here, telling of the things that are to come in the last days. But I might call your attention to the fact that the Savior in the Sermon on the Mount said,

Beware of false prophets, which come to you in sheep’s clothing, but inwardly they are ravening wolves. (Matthew 7:15.)

To the people on this hemisphere he made the self-same statement.

I also call your attention to the words of Paul in his farewell to the elders of Ephesus. He said,

For I know this, that after my departing shall grievous wolves enter in among you, not sparing the flock. Also of your own selves shall men arise, speaking perverse things, to draw away disciples after them. (Acts 20:29-30.)

I would like to read what Paul said to Timothy, but time forbids. But I will read what Moroni said to Mormon. I might read just one paragraph of the latter. It is the thirty-second verse in the eighth chapter of Mormon:

Yea, it shall come in a day when there shall be churches built up that shall say: Come unto me, and for your money you shall be forgiven of your sins.

The ravening wolves are amongst us, from our own membership, and they, more than any others, are clothed in sheep’s clothing, because they wear the habiliments of the priesthood; they are they to whom Brother Widtsoe referred, as distorting the truth. We should be careful of them, and I endorse every word that Brother Widtsoe said, as to the obligations of those who instruct the youth.

There is a heresy which is amongst us now in some degree and which has existed since the early Christian days, which declares that the God of the Old Testament is not the God of the New, that the Old Testament God has disappeared. I have never quite been able to see how the proponents of this idea could square it with the statement which the Savior made repeatedly, that he did only what he had seen the Father do, and he taught only what the Father had taught him. Thus those who would drive out the God of the Old Testament must deny the Christ in order to do it. These other churches seem to regard God as a God of vengeance, seeking to destroy his children. We know that our God is a God of love, because he was the Father, and as I have said, Jesus said he taught what his Father had taught, and he did what he had seen his Father do.

My brothers and sisters, if there ever was a time in our history when we must be on guard against the insidious influences and propaganda of the churches of the world and the atheists of the world, at time is today. We must not be asleep. We have the truth; we must preserve it and ourselves in it.

After Jesus had returned from the wilderness following his baptism, he came to the River Jordan where John was still baptizing. As John stood there, seeing the Savior, he said, “Behold the Lamb of God,” and apparently replying to somebody who wanted to flatter him and tell him how great he was, he added, “. . . whose shoe’s latchet I am not worthy to unloose.” (John 1:27.)

The next day Jesus came again to the group on the banks where John was baptizing, and again John said, “Behold the Lamb of God.” Andrew and some others who were the disciples of John, followed Jesus, who took them to his room and there taught them. Then Andrew went out and found Peter, and declared with joy, “We have found the Messias,” the Christ.

We of the Church have found the Messiah, the Christ. He authorized and directed the building of this Church. We must not let the error and the evil which knock at our doors, cross the threshold and enter therein to rob us of the greatest things that God has to give us—our children.

May we be as wise as serpents, and as harmless as doves. May we protect our youth and those of ours who do not see as clearly as they should these dangers which threaten them, and against which I am warning you.

2 thoughts on “The Old Testament God Has disappeared?”