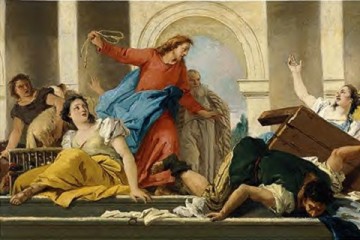 There is probably no subject about which there is more dispute, disagreement, and contention than that of politics. Because of this, some may abstain from political activity. Others may desist for fear they might offend. Recognizing that this is a highly controversial subject, and that they might lose friends, business patronage, or social standing by becoming involved, they remain aloof.

Of course we should avoid contention both in the Church and without. Many scriptures affirm this and declare that the penalty therefore is exclusion from the Kingdom of God. Where the Lord dwells there will be harmony, as this statement regarding the City of Enoch indicates:

And the Lord called his people Zion, because they were of one heart and one mind. . . (Moses 7:18)

But do we become one by keeping our differences to ourselves? Can we achieve unity by remaining silent? Obviously we cannot. To become of one heart and one mind, demands a free exchange of ideas and views in an atmosphere of love and harmony. Furthermore, we must recognize the impossibility of finding the correct answers to the problems of government anywhere except in the scriptures. Until we cast away the misleading precepts of men and recognize the Lord as our King and Lawgiver, we shall neither find the truth nor come to a unity. We can become united only on the basis of truth, and a knowledge thereof comes only from God. Our Lawgiver has given us a simple scripture on this. It is one universal standard applicable to individual action as well as political laws. Our Savior called it . . . “the law and the prophets.”

Having agreed upon these two fundamental truths, the next step should not be beyond our reach. It should not be difficult to come to a unity of belief in determining which laws are in conformity with the Golden Rule. That is the one universal standard for distinguishing good from evil which all men of every nationality and in every age know and can apply. The Savior in His infinite wisdom has provided us with a short, simple, easily applied rule of conduct with respect to laws and government which will enable us to obey His commandment to be one. President McKay has said:

Next to being one in worshipping God, there is nothing in this world upon which this Church should be more united than in upholding and defending the Constitution of the United States. (CR, Oct, 1939, p. 105)

Another observation regarding political unity is this by Brigham Young:

Let the Latter-day Saints be agreed upon their temporal and financial interests. I will ask the question: do you think the Father and the Son are agreed in their political views and their financial operations? Why every Christian in the world says yes, and we say yes; and we cannot be one, in the sense Jesus prayed for us to be, without this. (JD 11:278)

It is fervently hoped that what is contained herein will help Church members as well as others come to a unity of understanding regarding the laws and Constitution which the Lord has caused to be established. Our failure to do this soon may bring us down into destruction both temporally and spiritually.

One of the worst evils of which men are capable is to disobey the Lord’s commandments when acting through the agency of government. The punishments decreed for those who do so are among the most severe known. The reasons are easy to see.

When a government is prostituted from its God-ordained purposes so that instead of prohibiting evil, punishing the wicked, and protecting the work of the Lord, it does just the opposite; when, through its evil example it corrupts the hearts of all the people by teaching that good is evil and evil is good, it becomes the agent of Satan and causes abominations to reign. The Lord will not tolerate such a government. He will destroy it along with those who built it up because, as He has decreed, abominations shall not reign. This choice land has a special blessing for the righteous and a cursing for the wicked which only readers of the Book of Mormon are aware of. (Ether 2)

When the Lord establishes the government of a nation and grants unto its voting citizens the political opportunity to alter the laws He has commanded them to obey, He thereby gives them the power to preserve liberty on the one hand, or to commit the awful wickedness described above on the other. He makes it possible for them to choose between His plan of freedom and Satan’s plan of slavery. In essence, those living under such a government are once more faced with the same issue which confronted us in the pre-earth life. However, since in this life we are walking by faith and without a full understanding of the issue, the penalties for choosing wrong will not be nearly as severe as before. Nonetheless, they are so painful that no one will want to suffer them.

The Lord has brought two groups of people to the Americas, established His Church among them and given them a government subject to the voice of the people. The first group to receive these blessings were the Nephites. They came here about six hundred years B.C. and lived under a monarchy for about five hundred years before the Lord gave them the privilege of self-rule. They governed themselves for about one hundred and twenty five years before they so completely corrupted their laws and prostituted the political power they possessed that the Lord found it necessary to destroy those who supported such wickedness.

The second group, who are called Gentiles by the Book of Mormon prophets, began arriving in the Americas about 1500 A.D. They lived under foreign monarchies for about three hundred years before the Lord saw fit to establish a constitutional system of self-government among them. While this system has already lasted about seventy years longer than did the Nephite government called the reign of the judges, there is much evidence that the Gentiles are using their power of self-rule to corrupt God’s laws, as did the Nephites. In this book we shall undertake to point out in what manner we are repeating their mistakes and what we must do to avoid their tragic fate.

The Nephites corrupted their laws twice. The record indicates that the first time the corruption occurred, it was due to the fact that many of the righteous people were seduced and deceived into doing so. It is concluded herein that the abandonment of the Lord’s laws in the United States is happening for somewhat the same reason.

It is entirely possible that the most pervasive and dangerous deception of this age is the belief that the laws of God do not apply to our political conduct. The only place the great majority of us use force to affect the freedom of others is through the agency of government, and so our political decisions are, in reality, decisions about human freedom.

It is suspected that, generally speaking, people do not realize that these are the issues they are deciding when they exercise their God-given powers of self-government. After life itself, freedom is the greatest gift God has to give. But with full political freedom comes the opportunity to choose Satan’s plan of slavery.

Herein we shall discuss these three basic truths concerning our political responsibilities.

(1) With respect to those members of the Church who live under the Constitution of the United States, the Lord has commanded us to obey His will concerning the laws of the land.

(2) This same group has been instructed to distinguish between the Lord’s laws which are constitutional and those which are not, for, as He has said, and as pertaining to law of man whatsoever is more or less than this cometh of evil.

(3) The penalties we will suffer for failing to obey the Lord’s political commandments are most severe and include a loss of the power of the priesthood.

In discussing these truths we shall compare the features of the Nephite government called the reign of the judges with those of the Constitution of the United States. We shall develop a standard by which voting citizens may distinguish between those laws which are constitutional and those which are not. We shall contrast the political sins of the Nephites with those of the people living under the United States Constitution and point out that our living prophets are calling upon us to heed the warnings of the Book of Mormon in order to avoid the scourge and judgment which otherwise will come upon us.

Gentiles belonging to the Lord’s Church and living under the government He established are as much obligated to obey His commandments respecting the one organization as the other. Our failure to obey God’s will concerning the laws of the land will bring to pass our destruction as it did in the case of the Nephites. Only by coming to a unity of belief regarding our political responsibilities and then fulfilling them can we hope to avoid the fate of the Jaredite and Nephite nations which preceded us on this chosen land.

Those who would live in a Zion Society, must be of one heart and of one mind,

And the Lord called his people Zion, because they were of one heart and one mind, and dwelt in righteousness; and there was no poor among them. And it came to pass in the thirty and sixth year, the people were all converted unto the Lord, upon all the face of the land, both Nephites and Lamanites, and there were no contentions and disputations among them, and every man did deal justly one with another. And it came to pass that there was no contention in the land, because of the love of God which did dwell in the hearts of the people.

And there were no envyings, nor strifes, nor tulmults, nor whoredoms, nor lyings, nor murders, nor any manner of lasciviousness; and surely there could not be a happier people among all the people who had been created by the hand of God.

There were no robbers, nor murderers, neither were there Lamanites, nor any manner of -ites; but they were in one, the children of Christ, and heirs to the kingdom of God. And how blessed were they! For the Lord did bless them in all their doings. . . (Moses 7:18, 4 Ne. 1:2, 15-18)

12 thoughts on “We Cannot Achieve Unity by Remaining Silent”