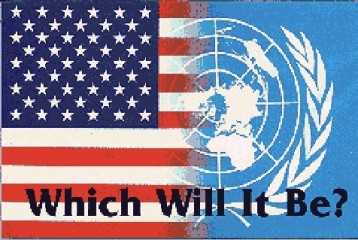 Some have touted the United Nations as being a “Heavenly” institution designed to rid the world of war and prepare for the Second Coming of Christ. Others contend that its design is to bring about a tyrannical world government under which Satan’s plan of human slavery can be instituted.

Let’s examine the facts and find out if the United Nations is God’s government in embryo, or Satan’s plan of tyranny on earth, by comparing God’s revealed pattern of government with the tenets of the UN.

The scriptures state that government, in order to remain in peace, must “secure to each individual the free exercise of conscience, the right and control of property, and the protection of life.” (D&C 134:2)

The scriptures affirm that rights must not be violated, under the UN any right can be limited as prescribed by law.

Let’s also examine the authors of the UN charter, along with the interests they represent, and compare them to the words of modern LDS Church leaders:

“We consider it (Communism) the greatest satanical threat to peace, prosperity, and the spread of God’s work among men that exists on the face of the earth.” (First Presidency Message, 1966)

“I am sorry to see this murderous influence prevailing throughout the world… This feeling of communism… is contrary to every principle of the Gospel of the Son of God” (John Taylor JD-22:142-3)

According to Church leaders, the result of this Communist influence on the United Nations Charter is clear:

“Perhaps the most striking feature of the Charter is the plainly discernible track of the Great Bear either by way of express grants of power available and advantageous to him or by limitations against the exercise of powers by the Charter members,—all for the benefit of the Bear.” (J. Reuben Clark, 1945)

“Since the inception of the UN, we have had nothing but wars and rumors of wars… These circumstances should have been unexpected, because “communism and all other similar-isms.” Are merely clumsy counterfeits which Satan always devises of the Gospel.” (Marion G. Romney, BYU, 3/1/55)

“United States membership in the United Nations has caused a perversion of our fundamental concepts of government… We cannot restore Americanism; we cannot have an American policy, either foreign or domestic; we cannot reestablish America as a free and independent constitutional republic—until we withdraw from the United Nations. “(Ezra Taft Benson, quoting The Dan Smoot Report, 1962, The Red Carpet, P. 193-7)

“…let us have no further blind devotion to the communist-dominated United Nations.” (Ezra Taft Benson, A Race Against Time, BYU, 12/10/63)

19 thoughts on “The United Nations: Preparing for God’s Reign on Earth or Planned Tyranny?”