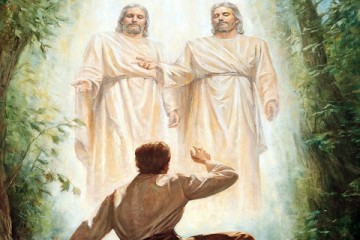 “AND I saw another angel fly in the midst of heaven, having the everlasting gospel to preach unto them that dwell upon the earth, and to every nation and kindred, and tongue, and people; saying with a loud voice, Fear God and give glory to Him; for the hour of His judgment is come; and worship Him that made heaven, and earth, and the sea, and the fountains of water.”

God ordained that Joseph Smith should receive at the hand of that holy
angel His everlasting gospel, and reveal unto us His mind and will, to confer
sacred priesthood and keys, to administer in the ordinances of the gospel for
our eternal salvation. Of this He said:

“I the Lord, called upon my servant Joseph Smith and spoke unto Him from
heaven, and gave him commandments.”

“Behold, thou art Joseph and thou wast chosen to do the work of the Lord.”

And in the following words the Lord commanded those who professed His name to receive Joseph Smith’s revelations as authority from Him:

“Being inspired of the Holy Ghost to lay the foundation thereof, (meaning
the Church) and to build it up unto the most holy faith . . . . Wherefore,
meaning the Church, thou shalt give heed unto all his words and commandments which he shall give unto you, as he receiveth them, walking in all holiness before me.”

All who have a portion of the spirit of truth in them will understand that
Joseph Smith’s words and commandments were of God and binding upon men as His word and law only when they were given under the inspiration of the Holy Ghost, and this while Joseph Smith was strictly observing God’s ordinances.

“For although a man may have many revelations, and have power to do many mighty works, yet if he boasts in his own strength, and sets at naught the counsels of God, and follows after the dictates of his own will and carnal desires, he must fall and incur the vengeance of a just God upon him.”

The Lord also told Joseph Smith that the gifts, powers, and blessings that
had been bestowed upon him would be taken away if he did not abide in
Him.

This prophet was mortal and subject to fault when the Holy Ghost was not
with him, just as other men chosen of God have been and will be in mortality.
We read of Joseph’s sinning, repenting, and being forgiven of the Lord.”(58)
If these weaknesses to which mortal is heir, were evidenced in a tried and
proven prophet of God, as was Joseph Smith, would they not possess other men, not so gifted, to an even greater degree? Would not they, too, be subject to a like condemnation for sin? We are informed that God “cannot look upon sin with the least degree of allowance.” This being God’s truth no man can
expect, or be expected, to retain the gifts and callings of God if he transgresses His laws.

No man can commit sin in any degree while possessed of the Holy Ghost, nor
can he possess the Holy Ghost while committed to sin. No being, Jesus Christ
himself excepted, ever dwelt long in mortality without sin, for the reason that in his mortal state he cannot endure in the constant possession of the Holy Ghost. It consumes all dross of which the tabernacle of man is composed.

Because of this a translation, or partial change, was granted John the Beloved, the three Nephite disciples, the worthy inhabitants of Enoch’s holy city, Elijah, and others. Thus the powers of the Holy Ghost could be ever with them, preserving from sin, death, and the devil.

Inasmuch as Joseph Smith was warned against transgression and threatened
with the loss of his divine gifts should he continue in sin  and a failure to observe God’s ordinances was one important condition named  is it not reasonable to believe that that warning, threat, and its execution would
apply with equal force to his successors and all who essayed to speak for God?

It is only when men are humble, contrite, and faithfully observing God’s
laws and ordinances that they can possess the Holy Ghost and speak thereby for God. It is only at such times and under such conditions that man’s
prophecies, teachings, and revelations are divine, and have a binding
authority to require obedience in man. At all other times their wisdom is
worldly, of self and likely to err. Consequently the significance of their
words may be measured by their personal knowledge and experiences through a like wisdom in their fellows, and demands only a proportionate respect. Of this matter we read:

“President Wilford Woodruff is a man of wisdom, but we do not believe his personal views or utterances are revelations from God; and when ‘Thus saith the Lord’ comes from him, the Saints investigate it; they do not shut their eyes and take it down like a pill.”

“To what extent is obedience to those who hold the priesthood required?  This is a very important question, and one that should be understood by all Saints. . . . We have heard men who hold the priesthood remark that they would do anything they were told to do by those presiding over them, even if they knew it was wrong; but, such obedience as this is worse than folly to us.

It is slavery in the extreme; and the man who would thus willingly degrade himself should not claim a rank among intelligent beings, until he turns from his folly. . . . Others in the extreme exercise of their almighty  authority, have taught that such obedience was necessary, and that no matter what the Saints were told to do by their Presidents, they should do without asking any questions . . . . We would ask, for what was the priesthood given unto man? It is that they may have the right to administer the law of God.

Have they a right to make void that law? Verily, no! When the law of God has gone forth from His own mouth, and then declared by the mouths of His apostles  and prophets, saying, Thou shalt not kill, then, we say, who can kill and be forgiven? And in like manner it might be asked of all the laws of God.

Who has the right to make them void? None can revoke the decree but Him by whom it was given; neither can the laws of God be trampled upon with impunity, or revoked by a lesser power than that by which they were framed.

It is written of God that He cannot lie; then none need suppose that He
will approve of it through His authority which is on the earth; “neither is He the son of man that He should repent, therefore He will maintain the law by which His kingdom is governed.”

“Where the authority of God is, there should be the confidence of all men reposed sufficiently to obey His laws; but not to violate them; for we have not yet learned that it has power enough to save the transgressor in his sins.

Some men have been so wise as to think the little authority they had was sufficient for them to set aside laws and revelations, and meet our justice and judgment upon their own responsibility. But in the end they have found that responsibility to be greater than they can bear. Some have supposed that the more authority men have in the kingdom of God, the greater is their liberty to disregard His laws, and that their greatness consists in their almost unlimited privileges, which leave them without restrictions; but, this is a mistaken idea. Those who are the greatest in authority, are under the greatest restrictions; the law of their sphere is greater than that of those who are less in power, and the restrictions and penalty of that law are proportionately greater:

Therefore, they are under greater obligation to maintain the virtue of the law, and the institutions of God.”

This should make clear our position as believers in God and men holding His
priesthood and administering thereunder.

2 thoughts on “THE CALL AND AUTHORITY OF JOSEPH SMITH”