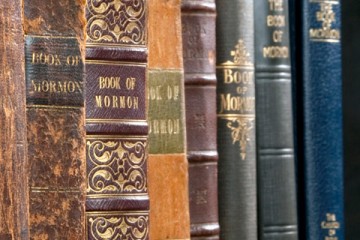 In 1832 the Lord put the entire Church under condemnation.  However, in His tender mercies, He gave us an opportunity to remove that condemnation.  Will we take advantage of this loving opportunity, or will we wait until it is too late and miss this chance to receive the blessings of Zion?

D&C 84: 54And your minds in times past have been darkened because of unbelief, and because you have treated lightly the things you have received— 55Which vanity and unbelief have brought the whole church under condemnation.  56And this condemnation resteth upon the children of Zion, even all. 57And they shall remain under this condemnation until they repent and remember the new covenant, even the Book of Mormon and the former commandments which I have given them, not only to say, but to do according to that which I have written— 58That they may bring forth fruit meet for their Father’s kingdom; otherwise there remaineth a scourge and judgment to be poured out upon the children of Zion. 59For shall the children of the kingdom pollute my holy land? Verily, I say unto you, Nay.

In the April 1986 General Conference, President Ezra Taft Benson (as President of the Church), said that the Church continued to be under the condemnation put upon them by the Lord 154 years earlier.

So what specifically are we under condemnation for, and how did the Lord say we could have it removed, and how would we know it was removed?

The Lord explains that our minds have been darkened because of our unbelief and because we don’t treat the things that God has given us with the seriousness needed.  The Lord then goes on to say that we are vain, and that vanity, along with our unbelief has caused our condemnation.

How are we vain?  What don’t we believe?  Are there doctrines and teachings of the gospel that make us uncomfortable or that we outright reject?  What things has the Lord given us that we (as a general rule) treat lightly?

In verse 57 the Lord starts to explain how to remove the condemnation and the marvelous blessings we can receive if we choose to do so when He says we will be under condemnation until we repent.  He is talking to the people in general, so this is not some random personal sin, but something that the people are doing as a whole. What sins are we committing as a people?

It seems clear that with his words “not only to say, but to do according to that which I have written” that we have fallen into a state described by the Lord when He came to the boy Prophet that very first time and said, “they teach for doctrines the commandments of men, having a form of godliness, but they deny the power thereof.” We need to not only talk the talk, but more importantly, we need to walk the walk, or as the Apostle James said, “Be ye doers of the word, and not hearers only, deceiving your own selves.”

It is clear that since we are still under the condemnation that we are still to remember the Book of Mormon, (and this is only getting worse with in ever increasing amount of members -often labeling themselves “New Order Mormons”- saying that it is inspired fiction, not a literal record of the ancient inhabitants of the America’s) and we are still not being “doers of the word”.

This is my personal fault and responsibility as much as it is anyone else’s, and I must take personal account for the revelations of God that I fail to remember in my regular activities as well as the covenants I have made and treat them with the seriousness they are warranted.  If I want the condemnation to be removed, I must not wait for others, being commanded in all things , but start now to act upon the commandments of God no matter how uncomfortable or unpopular they may be, because my current course of slothfulness and forgetfulness of the Lord and His commandments has only maintained that 179 year old condemnation, missing out on the fruit of the Fathers Kingdom and the true joy  obedience to God brings.

9 thoughts on “Removing the Condemnation”