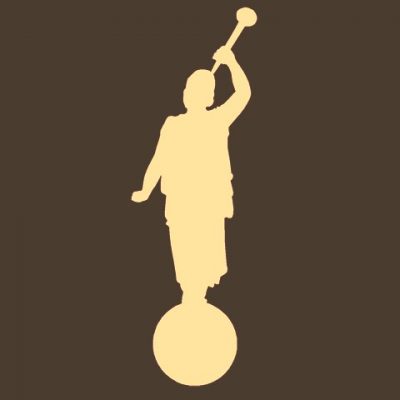 Who was Adam? … Our First Father
2 Nephi 9:9 … yea, to that being who beguiled our first parents, …
Abraham 1:3 … even the right of the firstborn, or the first man, who is Adam, or first father,
through the fathers unto me.
Abraham 1:26 … in the days of the first patriarchal reign, even in the reign of Adam, …
Who was Eve? … Mother of All Living
Moses 4:26 And Adam called his wife’s name Eve, because she was the mother of all living; for
thus have I, the Lord God, called the first of all women, which are many.
Could the creation of Adam have been figurative?
Genesis 2:7 …the Lord God formed man of the dust of the ground.
Was Adam the one created from the dust?
Ecclesiastes 3:20 …all are of the dust, and all turn to dust again. (see Mosiah 2:25)
Do the scriptures ever speak figuratively about man’s creation?
Isaiah 51:1 … look unto the rock [whence] ye are hewn, and to the hole of the pit [whence] ye are
digged.

How is all life created?
Genesis 1:11 And God said, Let the earth bring forth grass, the herb yielding seed, and the fruit
tree yielding fruit after his kind, whose seed is in itself, upon the earth: and it was so.
v24 And God said, Let the earth bring forth the living creature after his kind, cattle, and
creeping thing, and beast of the earth after his kind: and it was so. (see v12, 21, 25; see Luke
6:44)
Matthew 7:16 Do men gather grapes of thorns, or figs of thistles?
JST 1 Corinthains 15:37 And that which thou sowest, thou sowest not that body which shall be,
but grain, it may be of wheat, or some other;
v38 but God giveth it a body as it hath pleased him, and to every seed his own body.
v39 All flesh is not the same flesh; but there is one kind of flesh of men, another flesh of
beasts, another of fishes, and another of birds.
Abraham 4:12 And the Gods organized the earth to bring forth grass from its own seed, yielding
seed after his kind; and the earth to bring forth the tree from its own seed, yielding fruit, whose
seed could only bring forth the same in itself, after his kind; (see v21, 24-25)
Teachings of the Prophet Joseph Smith, p. 198 “… for it is a decree of the Lord that every tree,
plant, and herb bearing seed should bring forth of its kind, and cannot come forth after any other
law or principle.”
Teachings of the Prophet Joseph Smith, p. 373 “Whenever did a tree or anything spring into
existence without a progenitor? And everything comes in this way.”

What about Eve coming from the Rib?
Genesis 1:28/24 The Lord God said, It is not good that the man should be alone; … Therefore
shall a man leave his father and his mother, and shall cleave unto his wife: and they shall be one
flesh.
1 Corinthians 11:11 Nevertheless neither is the man without the woman, neither the woman
without the man, in the Lord.

Was Adam Righteous?
D&C 107:43 Because he (Seth) was a perfect man, and his likeness was the express likeness of
his father, insomuch that he seemed to be like unto his father in all things, and could be
distinguished from him only by his age. (If Seth was perfect, and was like Adam in all things,
then Adam must have been perfect too.)
Ecclesiasticus 49:16 … so was Adam above every living thing in the creation. (Apocrypha,
Wisdom of Solomon, KJV, see 2 Esdras 6:54)

Did Adam sin in partaking of the fruit?
1 Timothy 2:14 And Adam was not deceived, but the woman being deceived was in the
transgression.
Words of Joseph Smith, p. 63: “Adam did not commit sin in eating the fruits …” (McIntyre
minute book, 9 February 1841)

What does the fruit represent?
Genesis 3:22 And the Lord God said, Behold, the man is become as one of us, to know good and
evil

Are references to death ever figurative?
Deuteronomy 34:5 So Moses the servant of the Lord died.
Alma 45:19 The Lord took Moses unto himself.

What else do we know about Adam’s early life on earth?
Joseph Smith taught –
“Father John L. Lytle gave a very interesting account of his early experiences in the Church, his
travels with the Prophet Joseph, and of his telling them how Father Adam chased the game and
outstripped them and caught them, ad his knee was never brought to the ground so great was his
strength.” (Journal of Charles L. Walker, p. 39, 16 April 1882. See Journal of Oliver B.
Huntington, p. 207)

“Joseph Smith said that Eve had twenty-eight sons and twenty-eight daughters, and that Adam
had many wives. Brother Brigham then got into the stand and stated the same thing.” (William
W. Phelps, James Beck Journal (Notebook) 1859-1865, 8 October 1861)
“… it is said that Joseph Smith the Prophet taught that Adam had two wives.” (H.W. Naisbitt 8
March 1885, Journal of Discourses 26:115-116)

Was the creation of Adam literal?
“He created man, as we create our children; for there is no other process of creation in heaven, on
the earth, in the earth, or under the earth, or in all the eternities, that is, that were, or that ever will
be.” (Brigham Young, 18 Jun 1865, Journal of Discourses 11:122)
“Was he made of the dust of this earth?” No, but of the dust of the earth whereon he was born in
the flesh; that is the way he was made; he was made of dust. … I say he was not made of the dust
of the ground of this Earth, but he was made of the dust of the earth where he lived,” (8 October
1854, Brigham Young Addresses 2:231)
“When you tell me that father Adam was made as we make adobes from the earth, you tell me
what I deem an idle tale. When you tell me that the beasts of the field were produced in that
manner, you are speaking idle words devoid of meaning. There is no such thing in all the
eternities where the Gods dwell. Mankind are here because they are the offspring of parents who
were first brought here from another planet.” (Brigham Young, 9 October 1859, Journal of Discourses 7:285-
286)

Did Eve come from a rib?
“It is said by Moses the historian that the Lord caused a deep sleep to come upon Adam, and took
from his side a rib and formed the woman that Adam called Eve. This should be interpreted that
the man Adam like all other men had the seed within him to propagate his species, but not the
woman; She conceives the seed, but she does not produce it; consequently she was taken from
the side or bowels of her father.” (Brigham Young, Lecture at the Veil, St. George Temple, Diary
of L. John Nuttall (secretary to the First Presidency), 7 February 1877.)

Did Adam sin in partaking of the fruit?
“It was the design of the Lord that Adam should partake of the forbidden fruit, and I believe that
Adam knew all about it before he came to this earth.” (Brigham Young, 3 June 1855, Journal of Discourses
2:301-2)

What did the fruit represent?
“As soon as the devil was on earth he sowed the seeds of death in everything so as soon as they
began to eat of the fruit of the earth they received into their system the seeds of mortality and of
death so their children were mortal & subject to death, sorrow, pain and wo.” (Brigham Young, 6 May 1855, W.
Woodruff Journal)
“But upon partaking of the fruits of the earth while in the garden and cultivating the ground their
bodies became changed from immortal to mortal beings with the blood coursing through their
veins as the action of life.” (Brigham Young, 7 February 1877, L.J. Nuttall Journal)

Did Adam die?
“For when Adam and Eve got through with their work on this earth, they did not lay their bodies
down in the dust, but returned to the spirit world from whence they came.” (Brigham Young, 7 February 1877, L.
John Nuttall Journal) 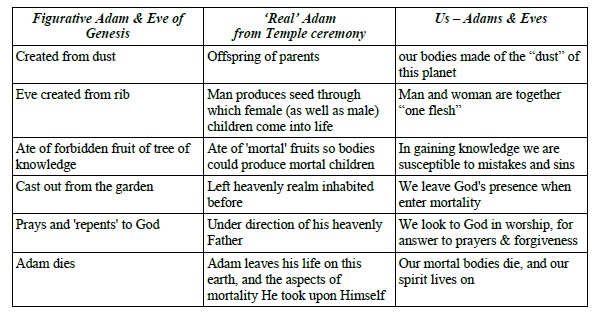