THE WATER IS NOW AT FULL BOIL

Gold is not necessary.  I have no interest in gold.  We will build a solid state, without an ounce of gold behind it.  Anyone who sells above the set prices, let him be marched off to a concentration camp.  That’s the bastion of money. -Adolf Hitler

Distorting a monetary system can be achieved through numerous different methods.  However, the mechanism of choice is irrelevant once a financial system – whether based upon precious metals, paper dollars, or seashells – becomes artificially inflated.  Although the mechanisms employed can differ slightly from one another, the end results are always the same.  Not only does inflation rob all participants in an economy, but does so with a discriminate attack on those who have the most to lose.  Chief among those are the poor, those on limited incomes, and people who have their savings in fixed financial investments.

We have been given prudent counsel from many of our Church leaders to live within our means.  this is sound advice not only for us but also for all people and businesses including government.  Many of us have firsthand experience or have witnessed others striving to cope with the consequences that spring forth as a result of taking on too much debt.  Of course, as our government continually takes on higher amounts of debt through the form of loans, we the people become collectively poorer each ear as we become the victims of confiscation through inflation.

In the early 1930’s, people became more curious about the monetary system and began questioning the soundness of their currency.  When the music plays and people have plenty of money at their disposal, very few stop to question how much longer their prosperity will continue.  Ignorantly, many people back then as well as today assume that the music and the financial good times will play indefinitely.  People only began asking tough questions converning the stability of their money because they were now forced to.  The roaring twenties, where loose terms and easy credit were found in abundance had now been replaced by our nations severest depression.  When individuals and families have little or no work, it makes paying down debt virtually impossible, greatly increasing the odds of foreclosure on a home, business, or both.  In these dismal circumstances, retaining one’s wealth regardless its size becomes the number one objective.  The need to hold on to one’s wealth is the only incentive needed to cause one to run to their bank in a desperate attempt to recover all that twas previously promised.

The end result was that in order to fix this emergency, President Roosevelt calmly issued a banking holiday.  When hoarding continued, he called in all gold.  In 1933 the federal government had borrowed a sum of $22 billion.  they were clearly living beyond their means, yet it was we the people that were left dangling from this hook in order to pay back this public debt.  Thomas Jefferson, who would quite possibly go into cardiac arrest if he could witness our monstrous public debt today, expressed these words of caution:

There does not exist an engine so corrupt of the government and so demoralizing of the nations as a public debt.  It will bring on us more ruin at home that all the enemies from abroad against whom this Army and Navy are to protect us. -Thomas Jefferson, To Nathaniel Macon, Aug 19, 1821

Considered one of our founding fathers, Thomas Jefferson unfortunately understood and witnessed firsthand the destruction and peril that foreign enemies could and did inflict throughout the Revolutionary War.  Interestingly, it was the taskmaster of debt, or public debt, that he feared would bring about more destruction and ruin to the people.

Without question, $22 billion is an extravagant amount of money.  Sadly, this number began to grow exponentially as the years and decades passed along.  It was the lesser of two evils – or so our government reasoned.  With help from their partner, the Federal Reserve, they began borrowing obscene amounts of money rather than taxing the people outright. If the government had been represented by men that honored moral integrity like our founding fathers did, then the national debt would not be the huge issue that it is today.

The stage was set for a rapid expansion of the nation’s money supply.  The Federal Reserve and all of its member banks had been pardoned from the burden of relinquishing their gold.  Unfortunately, the people were not granted the same relief.  With help coming in the form of the new legislation passed by their partner, the Federal Reserve could now rest easy knowing that their millions of previously issued dollars could no longer be redeedmed for gold.  To say that the Federal Reserve began to inflate at a torrent pace in order to lend the government all the money that they desired would be an extreme understatement.  By 1944 the commencement of the Bretton Woods conference had begun, and in just over a decade the public debt had ballooned to over $200 billion, an astounding 2,00% increase.

Who could stop this maddening clip of debt from continually reaching new heights year after year?  The only power strong enough to correct this misguided course was our government, who ironically stood to benefit the most from this maddening addiction.

We hope you enjoyed this preview of “Financial Armageddon”. You can get your copy at Amazon and other online retailers.

Great LDS gift ideas here, such as the Constitution of the Kingdom of God from the recently released Joseph Smith Papers Project 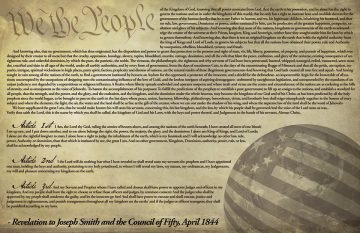