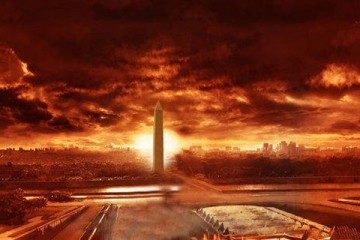 The Lord has told us to “renounce war and proclaim peace” (D&C 98: 16), yet I am surprised at how many Latter-day saints promote the opposite viewpoint. I want to take this opportunity to share some of the teachings we have received from the Lord and His prophets on this subject. First, I want to share the following message from fellow Mormon Chronicle contributor Scott Stover:

I was shocked and appalled when, in a recent presidential debate in South Carolina, the audience loudly booed Congressman Ron Paul for his suggestion that we should apply the Golden Rule in our international relations. I thought to myself, “What have we come to?” I thought of the cliche analogy of the frog who is placed in a pot of cold water while the heat is slowly turned up until he boils.

“And again, this is the law that I gave unto mine ancients, that they should not go out unto battle against any nation, kindred, tongue or people, save I, the Lord, commanded them. And if any nation, tongue, or people should proclaim war against them, they should first lift a standard of peace unto that people, nation, or tongue; and if that peole did not accept the offering of peace, neither the second nor the third time, they should bring these testimonies before the Lord; Then I, the Lord would fight their battles, and their children’s battles and their children’s children’s, until they had avenged themselves on all their enemies, to the third and fourth generation. Behold, this is an ensample unto all people, saith the Lord your God, for justification before me.”

We, the members of the Lord’s church, are commanded to be an ensign unto the world. How many of us, (myself included), cheered when we took our own (not the Lord’s) vengeance on Iraq and Afghanistan? How many of us felt a sense of righteous release? We might say, “Well, times have changed. It’s no longer as simple as it used to be!” Really? Do we think for one minute that the Lord didn’t see our day when this scripture was written, when this commandment was given? Was the Lord so short sighted that His commandments, declared by His very word to have been in effect for His “ancients”, have lost their effect after only 150 years?

No!!!!! We must stand with the Lord, even in these difficult, complicated times. We must trust in His promise that He will fight our battles. We must “lift a standard of peace” as we have been commanded. We cannot side with those in this country, in this world, who would wage pre-emptive war against a country like Iran (only the most current example in a long list of transgressions over the past century).

If we are to truly be an ensign unto the nations, to be members of the Lord’s Zion – the pure in heart, we must seek to understand the commandments of the Lord; we must trust in them, even if conventional “modern” wisdom suggests otherwise. We must each stand as a voice of reason, a voice of obedience, a voice of peace. His commandments are eternal, they have not expired, and they are just as valid today as they were in the days of the “ancients” and in the days of Joseph Smith.

As is evident from brother Stover’s message, we can turn to the Lord, the scriptures and the prophets for answers to the issues we face in the world today. We can then discover the correct principles. And now some words from the scriptures:

“Now the people said unto Gidgiddoni: Pray unto the Lord, and let us go up upon the mountains and into the wilderness, that we may fall upon the robbers and destroy them in their own lands. But Gidgiddoni saith unto them: The Lord forbid; for if we should go up against them the Lord would deliver us into their hands; therefore we will prepare ourselves in the center of our lands, and we will gather all our armies together, and we will not go against them, but we will wait till they shall come against us; therefore as the Lord liveth, if we do this he will deliver them into our hands. (3 Nephi 3: 18–21)

“And it was because the armies of the Nephites went up unto the Lamanites that they began to be smitten; for were it not for that, the Lamanites could have had no power over them. But, behold, the judgments of God will overtake the wicked; and it is by the wicked that the wicked are punished; for it is the wicked that stir up the hearts of the children of men unto bloodshed.” (Mormon 4: 4–5)

Quoting from Ezra Taft Benson with regard to United States Foreign Policy:

“Ever since World War I, when we sent American boys to Europe supposedly to ‘make the world safe for democracy’, our leaders in Washington have been acting as though the American people elected them to office for the primary purpose of leading the entire planet toward international peace, prosperity and one-world government.

“…We mistake the object of our Government… Conquest or superiority among other powers is not or ought not ever to be the object of republican systems. If they are sufficiently active & energetic to rescue us from contempt & preserve our domestic happiness & security, it is all we can expect from them… (The Records of the Federal Convention [Max Farrand, Editor], 1: 402)

“There is one and only one legitimate goal of United States foreign policy. It is a narrow goal, a nationalistic goal: the preservation of our national independence. Nothing in the Constitution grants that the President shall have the privilege of offering himself as a world leader.

“Nothing in the Constitution nor in logic grants to the President of the United States or to Congress the power to influence the political life of other countries, to ‘uplift’ their cultures, to bolster their economies, to feed their peoples or even to defend them against their enemies.

“The proper function of government must be limited to a defensive role.”

And a message from Spencer W. Kimball:

“In spite of our delight in defining ourselves as modern, and our tendency to think we possess a sophistication that no people in the past ever had—in spite of these things, we are, on the whole, an idolatrous people—a condition most repugnant to the Lord.

“We are a warlike people, easily distracted from our assignment of preparing for the coming of the Lord. When enemies rise up, we commit vast resources to the fabrication of gods of stone and steel—ships, planes, missiles, fortifications—and depend on them for protection and deliverance. When threatened, we become antienemy instead of pro-kingdom of God; we train a man in the art of war and call him a patriot, thus, in the manner of Satan’s counterfeit of true patriotism, perverting the Savior’s teaching:

“”Love your enemies, bless them that curse you, do good to them that hate you, and pray for them which despitefully use you, and persecute you; That ye may be the children of your Father which is in heaven.” (Matt. 5:44–45.)”

(Source: The False Gods We Worship by Spencer W. Kimball)

What do the scriptures teach us about war? (Article)
United States Foreign Policy by Ezra Taft Benson
Preemptive War & The Book of Mormon As a Record of Military Strategy by Hugh Nibley (Audio)

13 thoughts on “An LDS Perspective on War and Foreign Policy”