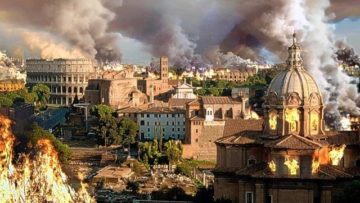 Throughout history we read of great civilizations, empires and nations.  Egypt, Assyria, Persia, Babylon, Greece, Rome, Britain and the United State of America!

We’ve also heard the old saying, “If we don’t learn from history, we are doomed to repeat it.”  So where does this statement come from?  Who said it?

A British Statesman and Philosopher, Edmund Burke (1729-1797), stated, “Those who don’t know history are destined to repeat it.”  Later a similar statement was made by the Spanish philosopher George Santayana (1863-1952), who said, “Those who cannot remember the past are condemned to repeat it.”  Others who have said it are, Winston Churchill and Mark Twain.  So, if a saying has been said and repeated multiple times is it worth listening to?  Does this apply to us today?  In what ways does it apply to us if it does?

In President Ezra Taft Benson’s talk in 1973, Watchman, Warn the Wicked, he talks about just this very thing.  Let’s see if it does apply to us and how.

“As a free people, we are following very closely in many respects the pattern which led to the downfall of the great Roman Empire. A group of well-known historians has summarized those conditions leading to the downfall of Rome in these words:

“… Rome had known a pioneer beginning not unlike our own pioneer heritage, and then entered into two centuries of greatness, reaching its pinnacle in the second of those centuries, going into the decline and collapse in the third. Yet, the sins of decay were becoming apparent in the latter years of that second century.

“It is written that there were vast increases in the number of the idle rich, and the idle poor.”

Do we in our country have people who are idle, both from the rich to the poor classes?  If so, what does it look like?  Do we hear some say to take from the rich and give it to the poor?  Are there people who live on both the government and the church welfare programs for generations?  What is the percentage of the welfare class?  Do we see a sense of entitlement today?

“The latter (the idle poor) were put on a permanent dole, a welfare system not unlike our own. As this system became permanent, the recipients of public largesse (welfare) increased in number. They organized into a political block with sizable power. They were not hesitant about making their demands known. Nor was the government hesitant about agreeing to their demands … and with ever-increasing frequency. Would-be emperors catered to them. The great, solid middle class—Rome’s strength then as ours is today—was taxed more and more to support a bureaucracy that kept growing larger, and even more powerful.

What can we see in our lives today that relates to this?  What about government bail-outs? Stimulus/emergency checks?  Free school/lunch programs?  Free government education grants?  Free health care?  Any “free” government program?  Is it really free?  What is the national debt today?

“Surtaxes were imposed upon incomes to meet emergencies. The government engaged in deficit spending. The denarius, a silver coin similar to our half dollar, began to lose its silvery hue. It took on a copper color as the government reduced the silver content.

“Even then, Gresham’s law was at work, because the real silver coin soon disappeared. It went into hiding.”

What’s the worth of our dollar today?  Did you know that the last “silver dollar” minted from 90% silver were last made in 1935?

“Military service was an obligation highly honored by the Romans. Indeed, a foreigner could win Roman citizenship simply by volunteering for service in the legions of Rome. But, with increasing affluence and opulence, the young men of Rome began avoiding this service, finding excuses to remain in the soft and sordid life of the city. They took to using cosmetics and wearing feminine-like hairdo’s and garments, until it became difficult, the historians tell us, to tell the sexes apart.

Do we relate to any of these today?  Finding excuses to remain at home on the couch playing video games?  Gender confusion?  Girls dressing like boys, and boys dressing like girls?  Have you had a hard time telling if someone is a guy or a girl?

“Among the teachers and scholars was a group called the Cynics whose number let their hair and beards grow, and who wore slovenly clothes, and professed indifference to worldly goods as they heaped scorn on what they called ‘middle class values.’

“The morals declined. It became unsafe to walk in the countryside or the city streets. Rioting was commonplace and sometimes whole sections of towns and cities were burned.

New data from Princeton University shows that nearly every major city in the United States experienced riots from late May to the end of August.  The only exceptions within the top 50 cities by population were Fresno, CA and Mesa, AZ.  https://www.breitbart.com/politics/2020/09/06/data-48-of-americas-50-largest-cities-hit-by-black-lives-matter-riots/

“And, all the time, the twin diseases of confiscatory taxation and creeping inflation were waiting to deliver the death blow.

“Then finally, all these forces overcame the energy and ambition of the middle class.

“We are now approaching the end of our second century.” (Address by Governor Ronald Reagan of California at Eisenhower College, New York, 1969.)

In 1787 Edward Gibbon completed his noble work The Decline and Fall of the Roman Empire. Here is the way he accounted for the fall:

1.    The undermining of the dignity and sanctity of the home, which is the basis of human society.

2.    Higher and higher taxes and the spending of public monies for free bread and circuses for the populace.

3.    The mad craze for pleasure, sports becoming every year more and more exciting and brutal.

4.    The building of gigantic armaments when the real enemy was within the decadence of the people.

5.    The decay of religion—faith fading into mere form, losing touch with life, and becoming impotent to warn and guide the people.

Is there a parallel for us in America today? Could the same reasons that destroyed Rome destroy America and possibly other countries of the free world?”

Have we forgotten history?  Are we doomed to repeat it?  What will history say about us?  What are we going to leave for future generations?  Can anything be done or are we just doomed?

In the Book of Mormon we have been repeatedly warned to not “let these things get above us” and if we do, to “awake to a sense of our awful situation.”  We also see in the Book of Mormon that when the people repented of their sins and kept the commandments of God, He did bless and strengthen them.

If sin is what has brought us here, what sins have we committed to bring us to this great “condemnation?”  It tells us exactly in Doctrine and Covenants 84:54-57.  Have we forgotten the Book of Mormon and also the former commandments?

When our leaders speak, do they speak of us or those out in the world who don’t know anything about them?  When the scriptures talk of the wicked who have forgotten their God, are they talking about people who have never read the scriptures or even know who God is?  When the Book of Mormon, which we are told was written for US in this day, is telling us of our impending doom and destruction because of the wickedness of the people, is it talking about people of other religions or non-religious people, or is it speaking about us; those who are reading it? 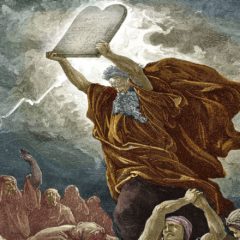 Elder L. Tom Perry stated in his 2013 talk, Obedience to Law is Liberty:

“In my judgment, four of the Ten Commandments are taken as seriously today as ever. As a culture, we disdain and condemn murder, stealing, and lying, and we still believe in the responsibility of children to their parents.

But as a larger society, we routinely dismiss the other six commandments:

·       If worldly priorities are any indication, we certainly have “other gods” we put before the true God.

·       We make idols of celebrities, of lifestyles, of wealth, and yes, sometimes of graven images or objects.

·       We use the name of God in all kinds of profane ways, including our exclamations and our swearing.

·       We use the Sabbath day for our biggest games, our most serious recreation, our heaviest shopping, and virtually everything else but worship.

·       We treat sexual relations outside marriage as recreation and entertainment.

We would add that swearing isn’t the only way to profane Gods name.  Not keeping our baptismal and or temple covenants is taking the Lords name in vain as well.

Do we really even take seriously the four Elder Perry says that we do?

Responsibility of children to their parents?

Are we still under condemnation as the Lord said we are and would remain until we repent and remember?

I think we can all agree that our nation is going down the wrong road at a very fast pace and that would indicate that we have not repented as God has told us to.  Doctrine and Covenants 84:59 says, “For shall the children of the kingdom pollute my holy land?  Verily, I say unto you Nay.”

If we do as the Lord has told all His other children in the past, to repent and come unto Him and KEEP ALL His commandments, we can and will prosper in the land.

Will we do it?

Or will we repeat history?