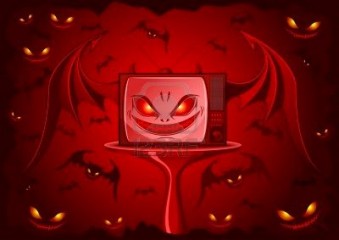 I am a firm believer in the LDS doctrine that “All things can be circumscribed into one great whole.” This got me into trouble as a college student, because I never failed to point out how I saw relationships between otherwise unrelated things. Everything we do, say, or think affects everything else we do, say, or think. In the October 2001 General Conference, Wayne S. Peterson quoted Charles A. Hall as saying:

Outside of revelation, our thoughts consist only of what enters our mind through the media of our five senses. Generally speaking, the Spirit can reveal things to us only if we have first done our part to search, study, and ponder2, so that revelation often tends to merely augment our personal collection of gathered data.

Ultimately, then, what enters our mind through the media of our senses is of utmost importance, as it directly determines our destiny.

The five physical senses are sight, smell, taste, touch, and hearing. For those of us without physical limitations, it is commonly recognized that sight is the most powerful, as evidenced by the phrase, “a picture is worth a thousand words.”3 Tastes, textures, sounds, and smells can be powerful, but they all fade with time; we can retain images for decades. What we look at, then, has an apparent advantage over our other senses in filling our minds and determining our destiny.

This, of course, begs the question, “What are we looking at?” Words and images. The prophets, through scriptural sources4, point to several problem areas: pornography, objects of lust, violence, immorality, blasphemy, and other forms of ungodliness, all mainly accessed via the internet, television, and movies. We know that these are problems even among members of the Church, because, among other things5, the General Authorities continually tell us so during General Conference.

The entire Western world is flooded with worldly propaganda extolling the virtues of non-virtue. The homes of most people these days are filled with the sights and sounds of television and movies from morning ‘til night19; Latter-day Saints are no exception. What is the content of the more popular programs (and, really, nearly allprogramming)? Namely, those things that the servants of the Lord have repeatedly warned us to avoid.

Recently, I gave the lesson during a joint Family Home Evening with a large group of family members. We have a lot of children, all under the age of eleven, so I kept it simple. The topic was obedience, and it was entirely out of the scriptures. This was it:

Why did God create the earth?

And there stood one among them that was like unto God, and he said unto those who were with him: We will go down, for there is space there, and we will take of these materials, and we will make an earth whereon these may dwell; And we will prove them herewith, to see if they will do all things whatsoever the Lord their God shall command them (Abraham 3:24-25).

How do I know what God wants me to do?

For even hereunto were ye called: because Christ also suffered for us, leaving us an example, that ye should follow his steps (1 Peter 2:21)

What did Jesus do for me, and how does it help me?

We believe that through the Atonement of Christ, all mankind may be saved, by obedience to the laws and ordinances of the Gospel. (Articles of Faith 1:3)

…I give unto you directions how you may act before me, that it may turn to you for your salvation. (D&C 82:9)

And when we obtain any blessing from God, it is by obedience to that law upon which it is predicated. (Doctrine and Covenants 130:21)

Is it always easy to do what is right?

Though he were a Son, yet learned he obedience by the things which he suffered (Hebrews 5:8)

And my people must needs be chastened until they learn obedience, if it must needs be, by the things which they suffer. (Doctrine and Covenants 105:6)

After a brief discussion of each point, I gave everyone a handout I found in the Gospel Art Picture Kit6. This is what it said:

I Am a Child of God

I know Heavenly Father loves me, and I love Him.

I can pray to Heavenly Father anytime, anywhere.

I am trying to remember and follow Jesus Christ.

It’s amazing how simple the Gospel can be. I drew attention to lines 10 and 11, explaining that if the things we listen to, read, or watch, violate any of the things the Lord expects of us, then we can know that it is inappropriate. It’s as simple as that.

As a frequenter of Facebook, I often see comments from LDS friends and relatives discussing their favorite television programs, or the latest movie they have seen. I cringe as, more often than not, they contain swearing, blasphemous language (taking the Lord’s name in vain), immodest dress, immoral jokes or behavior, or glorify Word of Wisdom violations. What are people thinking?

I realize that, most of the time, they aren’t thinking, and that’s the problem. I know because I was there once, myself. A series of events brought me to the realization of the things I am writing about in this article, and one of them was the fortunate opportunity I had to stumble upon the Christian website, Hollywood and God7. The main page features a short video where a correspondent interrogates random people outside a famous theater in Los Angeles. He begins by finding out if they are Christian (all of the interviewees included in the video are Christian, due to the nature and purpose of the video). Then, the conversation, without fail, goes like this:

Host: “Do you watch movies where the characters take the Lord’s name in vain?”

Man on Street: “Yeah, it’s in like every movie nowadays”

Host: “Does it bother you when they do that?”

Man on Street: “Not really. I mean, you can’t get away from it; and everyone talks like that, anyway.”

Host: “Would you watch a film where they used your mother’s name as a swear word?”

This made me realize the importance of paying close attention to the media I was consuming. As I paid attention, I noticed that blasphemy is a pervasive problem in our popular culture. Needless to say, I don’t watch too many movies anymore.

The scriptures make it abundantly clear that the most important thing we can do is have the Holy Ghost with us8. They also make it clear that the Spirit is grieved, and leaves us whenever evil things are present9. We can’t have it both ways, living as hypocrites. We must decide, once and for all, to “hate the one and love the other, or… hold to the one and despise the other.”10 The Lord, through John the Revelator, made this crystal clear:

We must make a firm decision to either follow the Lord, or not, and then live accordingly! Make up your mind! Then, once you have determined that you will follow the Lord with all your heart, don’t worry about the consequences!

What’s that? Your friends are talking about movies and TV shows you’ve never heard of? So what?! You’ll never get to see Goonies ever again? So what?! Is GLEE the price you want to pay for salvation?

Here now (finally!), we lay it all out on the table: our actions determine our future kingdom of glory. We all want to dwell in the Celestial Kingdom for eternity (at least we should!), but Doctrine and Covenants section 88 tells us:

…he who is not able to abide the law of a celestial kingdom cannot abide a celestial glory.

Most of the time, we Latter-day Saints are complacent; we hear the words of the prophets, we feel the Spirit testify of truth, we smile, and we… make absolutely no changes in the way we live our lives. This should not be! If, in our humility, we recognize our “wretched state,”13 we will desire to repent, and in doing so we become like God in one way that we previously were not!14

We are told that inheritors of the Telestial Kingdom will be “they who received not the gospel of Christ, neither the testimony of Jesus.”15 “It embraces those who on earth willfully reject the gospel of Jesus Christ, and commit serious sins such as murder, adultery, lying, and loving to make a lie (but yet do not commit the unpardonable sin), and who do not repent in mortality.”16

The Terrestrial Kingdom will consist of mainly two types of people: “honorable men of the earth, who were blinded by the craftiness of men.” and “they who are not valiant in the testimony of Jesus.”17 “Those who did not receive a testimony of Jesus while on earth, but who could have done so except for their neglect, are also heirs to the Terrestrial Kingdom.”18 This group will say, “I like my gay sit-com character, and his buddies, the metropolitan slut, the alcoholic, and the spewer of profanities. I would never emulate their activities, but if I reject them, the world will see me as a bigot. I’d better just do what everyone else is doing.”

It is absurd, of course, to place the determination of our eternal destinations on our choices of television programming and other media.

“Many movies and television shows portray behavior which is in direct opposition to the laws of God. Do not subject yourself to the innuendo and outright filth which are so often found there. The lyrics in much of today’s music fall in the same category. The profanity so prevalent around us today would never have been tolerated in the not-too-distant past. Sadly, the Lord’s name is taken in vain over and over again. Recall with me the commandment—one of the ten—which the Lord revealed to Moses on Mount Sinai: “Thou shalt not take the name of the Lord thy God in vain; for the Lord will not hold him guiltless that taketh his name in vain.” I am sorry that any of us is subjected to profane language, and I plead with you not to use it. I implore you not to say or to do anything of which you cannot be proud.

“Stay completely away from pornography. Do not allow yourself to view it, ever. It has proven to be an addiction which is more than difficult to overcome.”20

17 thoughts on “Television and the Three Degrees of Glory”