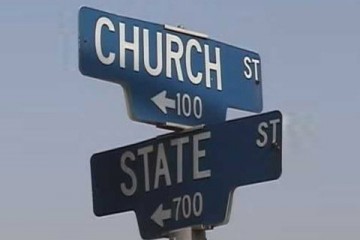 (From Chapter 5 of “The Elders of Israel and the Constitution”)

This brief review of the unashamed recognition of God and encouragement of religion in the American political heritage will cause some to wonder how these practices can be harmonized with the doctrine of separation of church and state.

It seems well established that the intent of the First Amendment was to require only separation of church and state, and not to require separation of religion and the state. In fact, as indicated in the previous chapter, from the beginning of the United States, governmental encouragement of religion has been considered highly desirable for the preservation of freedom.

Many people seem to misunderstand the real import of the recent Supreme Court decisions on religion in public education. The importance of those decisions is not so much whether children may pray or have devotional exercises in school, important as these activities are. The real significance of these decisions is that they represent a fundamental revision of the doctrine of separation of church and state.

Essentially, what the Supreme Court did was to declare that since there are many atheists in the United States, to be fair to them the government may no longer recognize God or show any preference for religion over atheism. In other words, the Supreme Court enlarged the doctrine of separation of church and state to include separation of religion and the state.

The significance of this change should not be underestimated. It is a change of the greatest importance, because it makes unconstitutional official encouragement of the one element which, from the beginning of the United States republic, has been regarded as indispensable to the preservation of freedom.

While to some this new doctrine sounds fair and plausible, it should be remembered that it represents a reversal of a fundamental principle of constitutional law without a constitutional amendment and without consulting the people or obtaining their consent.

It is not known to what extent this new point of view will be implemented. There are indications that the Supreme Court may already be backing down somewhat in the application of its broad statements. But it is a source of great concern that the point of view of most of the Supreme Court justices is so different from the traditional American point of view, and that the change has been made without the consent of the people.

1 thought on “Separation of Church and State”