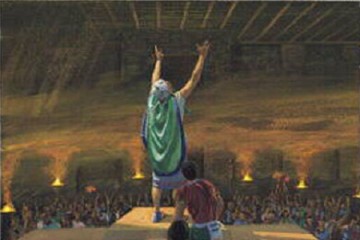 In a previous post, a commenter suggested the title of this article. At the time I thought it was a humorous comment, but didn’t really give it a second thought.  However, in my daily studies I kept coming across things that really showed it to be true, that in fact, we do stone our prophets.

I admit not the literal sense. In Old Testament days, prophets could be stoned without legal consequences. Today we must stone them in much more subtle ways.   Instead of physically stoning them, we pretend to support “modern revelation” and sit atop our proverbial Rameumptom so thankful that we are not “led away after the foolish traditions of our brethren” and oh so grateful that we are a “chosen and holy people” (Alma 31:17-18)

Like the Zoramites, we don’t need to kill the prophets; we just ignore them and change what they teach. The Zoramites did this and claimed they were taught that there was no Christ.

Joseph Fielding Smith further explained that it is those of us that consider ourselves to be Latter-day Saints that are the ones following in the steps of the Zoramites when he wrote,

“Are we not too much inclined to blame the generations that are past for the breaking of the new and e everlasting covenant, and to think it is because of the great apostasy which followed the ministry of the Apostles in primitive times, that these troubles are coming upon the earth?  Perhaps we should wake up to the realization that it is because of the breaking of covenants, especially the new and everlasting covenant, which is the fullness of the Gospel  as it has been revealed , that the world is to be consumed by fire and few men left.  Since this punishment is to come at the time of the cleansing of the earth when Christ comes again, should not Latter-day Saints take heed unto themselves?  We have been given the new and everlasting covenant and many among us have broken it, and many are now breaking it; therefore all who are guilty of this offense will aid in bringing to pass this destruction in which they will find themselves swept from the earth when the great and dreadful day of the Lord shall come.”   Joseph Fielding Smith, Deseret News, Church Department, Oct 17, 1936, page 7

President J. Reuben Clark also warned of this happening among us when he said,

“I tell you we are beginning to follow along the course of the early Christian church. . . . There is creeping into our midst, and I warn you brethren about it, and I urge you to meet it, a great host of sectarian doctrines that have no place amongst us. The gospel in its simplicity, is to be found in the revelations, the teachings of the Prophet and the early leaders of the Church. We shall make no mistake if we follow them.” – Gen Conf. Oct 1944

Joseph Fielding Smith was very worried about this and wrote in his journal that he could see how we were, as President Clark pointed out, following the course of the early Christian church;

“It is a very apparent fact that we have traveled far and wide in the past 20 years [since his father’s death].  What the future will bring I do not know.  But if we drift as far afield from fundamental things in the next 20 years, what will be left of the foundation laid by the Prophet Joseph Smith?  It is easy for one who observes to see how the apostasy came about in the Primitive Church of Jesus Christ.  Are we not traveling the same road?” Joseph Fielding Smith, personal journal, Dec 28, 1938 and quoted in Life of Joseph Fielding Smith, Joseph Fielding Smith & John J. Stewart, Deseret Book 1972, page 212

I think we’d better find out, since as the Prophet Joseph Smith taught,

“[I]f Zion will not purify herself, so as to be approved in all things in His (Gods) sight, He (God) will seek another people.” Teachings of the Prophet Joseph Smith, page 18