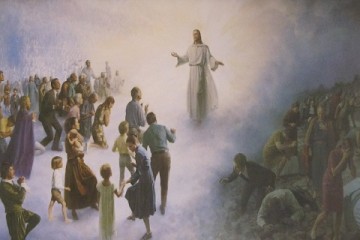 But the Book of Mormon predicts another great division among the people and this is the one which we are interested in today because it is in the process of occurring.

When the great division comes it will be between those who accept the testimony of the Book of Mormon on the one hand and those who refuse to see the hand of God in our punishments on the other.

There will be those who contend that our troubles are being caused by those who refuse to go along with government regimentation and those who insist that the answer to our problems lies in ever greater government control. They will continue to insist upon this as the only way we can live in this atomic age.

In essence the division will be drawn down that line which separates those who have faith in God from those who rely on the arm of flesh.

Those who elected to accept Christ’s plan of free agency and thus kept their first estate were permitted to come to earth, have mortal bodies, and associate with others who made the same choice. On the other hand, those who kept not their first estate were not permitted to have glory in the same kingdom with those who kept their first estate. (Abraham 3:26) They are condemned to suffer the company of one another, of other proud, rebellious, hate-filled spirits. And what a misery-filled existence that must be. How grateful we should be that we chose to follow Christ and are able to associate with others who prefer love rather than hate; joy rather than misery; freedom rather than bondage.

Reference is made once again to the scripture quoted earlier in which the Savior stated that He would judge the nations and would divide the people as a shepherd divideth the sheep from the goats with the sheep on the right hand and the goats on the left.

This indicates that there will be a major division between the righteous and the wicked. In another scripture found in the book of St. John, the Savior again made reference to the final judgment in these words:

Here the Lord speaks of the resurrection of two distinct groups of people, the good and the evil. But have not all sinned? Are not we all guilty of transgression?

Who then can possibly be included among those of the first resurrection or the resurrection of life? Of course it is the atoning sacrifice of the Lord which makes it possible for anyone to be cleansed of their sins by proper repentance; but still this does not exactly identify the basis for the great division.

Is it based upon cleanliness or purity? The scriptures repeatedly warn us that no unclean thing can enter into the Kingdom of Heaven and we must conclude that virtue is an indispensable requisite for those who dwell with the righteous in the hereafter.

But there is the parable of the Ten Virgins which indicates that even though we are pure, still there is only a 50-50 chance of being admitted into the Kingdom of Heaven. What more then is necessary?

This is justice in its most poetic form, for each person to be treated as he treats others. To implement this underlying law of justice, all the Lord needs to do is to divide us into homogenous groups at the end of each stage of our existence, and place us with that group we are most like. By so doing He confines us to a society of individuals who are disposed to treat us just like we are disposed to treat them. Thus it is the associates we are placed with who actually implement the law. They treat us as we treat them.

8 thoughts on “Prophecies of A Final Division – Mormon Chronicle EXCLUSIVE”