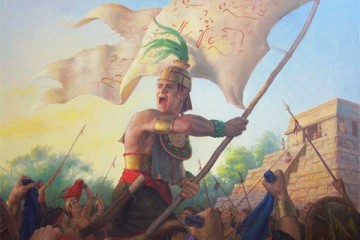 Perhaps like me, you read the Book of Mormon as a youngster and wondered at the greatness of Captain Moroni, the indefatigable defender of Liberty and Christianity. How could we not wonder at such a man? The historian Mormon, a linguist, a scholar, a general, and a prophet himself once said of Moroni, “Yea, verily, verily I say unto you, if all men had been, and were, and ever would be, like unto Moroni, behold, the very powers of hell would have been shaken FOREVER; yea, the devil would never have power over the hearts of the children of men.” (Alma 48:17) Mormon painstakingly engraved several versus to preserve forever the rational behind this statement. He even named his son after the great Nephite captain. Who wouldn’t want to be like unto Moroni?

What pains me most is that the gentile LDS culture at large is guilty of misinterpreting why this man was so great. I personally fell victim to the misunderstanding. But I have felt prompted to repent. I sincerely hope that you will prayerfully study Captain Moroni with an open mind in the true context that Mormon intended to place him. Moroni was a man of “perfect understanding.” Mormon included his story because we, the readers of the Book of Mormon, would need it in our day, not to justify war, but to preserve ourselves, body and spirit, from the blood and sins of our generation. Read on. [My comments are in brackets.]

There is a law, irrevocably decreed in heaven before the foundations of this world, upon which all blessings are predicated—And when we obtain any blessing from God, it is by obedience to that law upon which it is predicated. (D&C 130:20-21)

And thus he [Captain Moroni] was preparing to support their liberty, their lands, their wives, and their children, and their peace, and that they might live unto the Lord their God, and that they might maintain that which was called by their enemies the cause of Christians. And Moroni was a strong and a mighty man; he was a man of a perfect understanding; yea, a man that did not delight in bloodshed; a man whose soul did joy in the liberty and the freedom of his country, and his brethren from bondage and slavery; Yea, a man whose heart did swell with thanksgiving to his God, for the many privileges and blessings which he bestowed upon his people; a man who did labor exceedingly for the welfare and safety of his people. Yea, and he was a man who was firm in the faith of Christ, and he had sworn with an oath to defend his people, his rights, and his country, and his religion, even to the loss of his blood.

Now the Nephites were taught to defend themselves against their enemies, even to the shedding of blood if it were necessary; yea, and they were also taught never to give an offense, yea, and never to raise the sword except it were against an enemy, except it were to preserve their lives. And this was their faith, that by so doing God would prosper them in the land, or in other words, if they were faithful in keeping the commandments of God that he would prosper them in the land; yea, warn them to flee, or to prepare for war, according to their danger; And also, that God would make it known unto them whither they should go to defend themselves against their enemies, and by so doing, the Lord would deliver them; and this was the faith of Moroni, and his heart did glory in it; not in the shedding of blood but in doing good, in preserving his people, yea, in keeping the commandments of God, yea, and resisting iniquity.

[By following this law of non-aggression, Moroni and his brethren were worthy of the blessings the Lord promised to those who would follow. They gloried in this. The Lord would warn them to flee or to prepare for war and where to go to defend themselves. He would deliver them. What great faith they had in our Savior. The Nephites had ample rational to start a preemptive war at this point. But they knew that reasoning to be flawed. Amalickiah had just failed in his usurpation of the Nephite nation and was propagandizing the Lamanites to war. Moroni won the information war by raising the Title of Liberty. The truth prevailed. Peace ensued for four years.]

Yea, verily, verily I say unto you, if all men had been, and were, and ever would be, like unto Moroni, behold, the very powers of hell would have been shaken forever; yea, the devil would never have power over the hearts of the children of men.

[War is ultimately for dominion. The adversary seeks complete and total dominion over the souls of men. When we undertake…to exercise control or dominion or compulsion upon the souls of the children of men, in any degree of unrighteousness, behold, the heavens withdraw themselves; the Spirit of the Lord is grieved; and when it is withdrawn, Amen to the priesthood or the authority of that man… We have learned by sad experience that it is the nature and disposition of almost all men, as soon as they get a little authority, as they suppose, they will immediately begin to exercise unrighteous dominion. Hence many are called, but few are chosen. (D&C 121:37-40)This warning applies to us individually and collectively. This was part of the perfect understanding of Moroni.]

Now behold, Helaman and his brethren were no less serviceable unto the people than wasMoroni; for they did preach the word of God, and they did baptize unto repentance all men whosoever would hearken unto their words. And thus they went forth, and the people did humble themselves because of their words, insomuch that they were highly favored of the Lord, and thus they were free from wars and contentions among themselves, yea, even for the space of four years.

The war chapters of the book of Alma cannot be used as rational support for offensive or preemptive war. They cannot be used as rational for unrighteous force. The Nephites acted in a purely defensive manner. They didn’t even pursue the prisoners that were carried off into the landof Nephi. Moroni compelled the king-men to fight because they had violated their covenants. He had been given authority over the “armies.” (Alma 46:34) Imagine a modern day court-martial. Had Amalickiah not attempted to leave with his “armies” there would have been no compulsion initially. (Alma 46:29-33) The Nephites voluntarily flocked to the title of Liberty. Those who covenanted for liberty were given great responsibility. Moroni’s compulsion was a just consequence of the covenant. In the end the king-men usurped the government by force, further justifying their punishment. (Alma 62:4-5,10)

We truly have been raised in “enemy territory” (Elder Packer Oct 2011). If we continue to trust in the arm of the flesh and abandon our principles in the face of the fear generated by the propaganda media, then we are no better off than the Lamanites under Amalickiah. He usurped their government by treachery, conspiracy and false flag tactics. He put men on the towers to induce a war weary population into another hateful war. He was a model of our modern scheming leaders.

If we desire to achieve the outcomes accomplished by Captain Moroni, we must exemplify his perfect understanding. If we desire that the Lord prosper us in the land, warn us to flee or tell us whither to go to defend ourselves and to ultimately deliver us from our enemies, then we must have the faith of captain Moroni. (Alma 48:14-16) We must exercise dominion righteously. We must renounce war and proclaim peace and liberty. We must not act precipitously and preemptively. We must root out evil conspirators in our own lands and fortify our defense. Above all, we must raise the Title of Liberty and win the war of ideas that grips our society at its core. If we do not all is lost. My brethren who hold the priesthood of God, I implore you to thoughtfully and prayerfully consider your support for wars, policies, laws, restrictions and activities that affect the rights, liberties, and lives of others in this land and abroad.

In memory of our God, our religion, and freedom, and our peace, our wives, and our children (The Title of Liberty)

We believe that no government can exist in peace, except such laws are framed and held inviolate as will secure to each individual the free exercise of conscience, the right and control of property, and the protection of life. (D&C 134:2)

We hold these truths to be self-evident, that all men are created equal, that they are endowed by their Creator with certain unalienable Rights, that among these are Life, Liberty and the pursuit of Happiness.–That to secure these rights, Governments are instituted among Men, deriving their just powers from the consent of the governed, –That whenever any Form of Government becomes destructive of these ends, it is the Right of the People to alter or to abolish it, and to institute new Government, laying its foundation on such principles and organizing its powers in such form, as to them shall seem most likely to effect their Safety and Happiness. Prudence, indeed, will dictate that Governments long established should not be changed for light and transient causes; and accordingly all experience hath shewn, that mankind are more disposed to suffer, while evils are sufferable, than to right themselves by abolishing the forms to which they are accustomed. But when a long train of abuses and usurpations, pursuing invariably the same Object evinces a design to reduce them under absolute Despotism, it is their right, it is their duty, to throw off such Government, and to provide new Guards for their future security. (The Declaration of Independence 1776)

For a more in-depth study of Captain Moroni please read “Captain Moroni – Fighting the Elite and False Flag Terror since 72 BC” by this same author.

73 thoughts on “The Virtue of Captain Moroni”