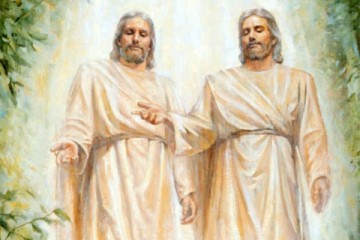 Scriptural jurisprudence is based on the principle that the LORD created man in his own likeness and image.  This principle provides a powerful argument and justification for the inalienable right to life, liberty, and property.  Violation of these rights is first and foremost a desecration of the image and likeness of the LORD; for the LORD has commanded that man’s life be preserved as each is made in his sacred image.

Man Was Created in the Image and Likeness of the LORD

This fact that man is literally created in the image of the Father is common knowledge amongst Latter-Day Saints.  It is the intent of the adversary to confuse mankind regarding the nature of our identity.  In the words of Joseph Smith, “If men do not comprehend the character of God, they do not comprehend themselves.” (Smith)   It was the intent of the Lord to establish this fact early on in his dealings with man.  Indeed, the very first mention of man in the scriptures is found in Genesis 1:26 – “And God said, Let us make man in our image, after our likeness…”

When the LORD has revealed himself to man, or when authorized agents begin to teach about the LORD, one of the first principles established is that mankind is created in God’s sacred image.  We see this in the experience of Moses (Moses 1:6), the Brother of Jared (Ether 3:15), when Aaron began to teach King Lamoni (Alma 18:34), when Aaron began to teach King Lamoni’s father (Alma 22:12) and in modern times, The Family: A Proclamation to the World.  That mankind is created in the image and likeness of the LORD is fundamental to understanding the reason for civil and ecclesiastical law.

The Primary Principle of Scriptural Jurisprudence

The principle of scriptural jurisprudence is introduced in Genesis chapter 9.  The Joseph Smith translation of this chapter offers the most clarity.  This chapter documents the Lord’s commandments to Noah and his family upon exiting the ark and is therefore, applicable to all mankind.  In verse 12, the Lord establishes two commandments: “And whoso sheddeth man’s blood, by man shall his blood be shed; for man shall not shed the blood of man.”  The first commandment given here is to execute a person who has committed premeditated murder.  The second is the prohibition against murder.

Verse 13 provides the reason why the murderer should be executed, and why the act of murder is prohibited: “For a commandment I give, that every man’s brother shall preserve the life of man, for in mine own image have I made man.”  This is the fundamental principle of God’s law-order and scriptural jurisprudence.  It is illegal to murder a man not because the victim’s right to life would be violated, but because that victim is created in God’s Holy image.  The Lord considers the murder of anyone of His children, created in his image, as an attack on Him.

Implications of the Principle

Scriptural jurisprudence thus interjects the LORD into all actions that can occur between men.  There are several examples within the scriptures that demonstrate the preeminence of the primary offense for violation of any law.

After King David had sent Uriah to the front lines of battle with intent to have him killed, he made the following statement to Nathan acknowledging his guilt: “I have sinned against the LORD.” (2 Sam 12:13)  Having thus committed murder, David understood the hierarchy of scriptural jurisprudence.  His first offense was against the LORD, namely, he had desecrated the image and likeness of the LORD.  His second offense, was against Uriah, who was deprived of his legally protected right to live.

Joseph in Egypt likewise understood the hierarchy of scriptural jurisprudence when he refused to commit adultery with Potiphar’s wife.  He declared: “How then can I do this great wickedness, and sin against God?” (Gen. 39:9)  First and foremost, such an act results in the desecration of the sacred image of the LORD, the secondary offense would have been against Potiphar.

King Benjamin summarized the hierarchy of scriptural jurisprudence best during his landmark address to the people of Nephi when he stated: “…that when ye are in the service of your fellow beings ye are only in the service of God…and behold also, if I, whom ye call your king, who has spent his days in your service, yet has been in the service of God, do merit any thanks from you, O how you ought to thank your heavenly King!” (Mosiah 2:17, 19)

This statement is a reiteration of the phrase, “Inasmuch as ye have done it unto one of the least of these my brethren, ye have done it unto me.”  When any person violates a scriptural law, the primary offense is against the LORD.  However, to treat another human being with dignity is to honor and revere the likeness and image of the LORD.  The LORD considers such beneficial human action personally, even if unintended by the person performing the good works.

After leaving Egypt, the Lord gave Moses his judgments regarding disputations that would inevitably arise between men.    The following example from Leviticus 6:2-7 demonstrates the fundamental principle of scriptural jurisprudence: the primary offense for violation of any scriptural law is desecration of the LORD’s image and likeness.  It also expounds on the principle of the eighth commandment, “thou shalt not steal.” (Ex. 20:15)   The following verses set forth the law which divides good actions from evil actions, and attaches a penalty for their violation.

In scriptural jurisprudence, if a man commits fraud, armed robbery, theft, or perjury, his first and preeminent offense is against the LORD.  By committing these actions against another man, he has desecrated the image and likeness of the LORD.  He has committed actions which oppose the commandment to preserve the life of man.

Thus while the LORD does interject himself in all such actions, it serves to establish a powerful justification for the right to live, and for property rights.  Any government, any entity, or any man, who presumes to deprive an individual of life, liberty, or property without due process, desecrates the image and likeness of the Almighty God.  Under the laws of God, Man, as His creation, is so sacred, that he personally interjects himself on behalf of victims of every crime, no matter how small.

This protection of property (or preservation of man) is set forth in verses 4 and 5.  The violator of the law must give back the principal balance of that which he stole plus an additional 20% to the human victim of the crime.  The violator is restored to good standing in society by meeting the LORD’s requirements for restitution.  The victim of the crime has given back that which was stolen plus compensation for being deprived of his property.  This is the civil aspect of scriptural law governing actions between men and the standard of the LORD.

Verses 6 and 7 set forth the ecclesiastical requirements of restitution in order to make amends for the primary offense.  Under the Mosaic Covenant, atonement was symbolized with animal sacrifice.  This requirement has been superseded as stated in 3 Nephi 9:19-20.  Man is now required to offer a broken heart, and a contrite spirit as his sacrifice in order to gain atonement with the Lord.  This of course is because of the sacrifice of Jesus Christ.

When the Lord first revealed himself to Moses, he strengthened him with the knowledge that he was created in his image.  This is one of the first things the Lord revealed to him.

“And I have a work for thee, Moses, my son: and thou art in the similitude of mine Only Begotten…” (Moses 1:6)

After the Lord had revealed unto Moses that glorious vision of the heavens and the Earth, the Lord withdrew his presence.  Many hours later Moses regained consciousness from the experience and was confronted by Satan.  Moses however was not deceived due to the knowledge revealed to him by the Lord.

“…Satan came tempting him, saying: Moses, son of man, worship me.  And it came to pass that Moses looked upon Satan and said: Who art thou?  For behold, I am a son of God; in the similitude of his Only Begotten; and where is thy glory, that I should worship thee?…Get thee hence, Satan; deceive me not; for God said unto me: Thou art after the similitude of mine Only Begotten.” (Moses 1:12, 13, 16)

The knowledge that he had been created in the image of the Man of Holiness had a profound influence on Moses, and gave him strength to face the adversary.  Not only is this principle fundamental to scriptural jurisprudence, it is the foundation upon which all men and women should defy or vote out of existence any apostate law-order.

Frank Chodorov, a noted historian and author, expounds on the reason for Israelite abhorrence of income taxation under King Solomon:

“It is told – 1 Kings, Chapter 12 – that the people of Israel petitioned their new king, Rehoboam, son of Solomon, to relieve them of the “yoke” his father had suffered them to bear.  The “yoke,” we learn from the story, was the cost of maintaining the political establishment; it was an income tax.  The designation of a levy on one’s production as a “yoke’ is interesting; it shows how keen is the mind unencumbered with erudition.  The yoke symbolizes the beast of burden, who of course, has no right of property.  When the human is similarly deprived of what he has produced – which is the essence of income taxation – he is indeed degraded to the status of an ox.  The Israelite, who maintained that he was made in the image of God, sensed the indignity; he wanted none of the “yoke.”” (Chodorov)

Any violation of man’s right to life, to liberty, and to property is first and foremost a desecration of the LORD’s holy image.  Under the laws of God, Man, as His creation, is so sacred, that he personally interjects himself on behalf of victims of every crime, no matter how small.  These inalienable rights and protections are bestowed upon all mankind regardless of race, ethnicity, religion, or gender.  Scriptural jurisprudence offers mankind a divine heritage, human dignity, inalienable rights, and a foundation upon which peace can be established.  The author of scriptural jurisprudence is the Prince of Peace.

4 thoughts on “In Mine Own Image”