In all of writing, seldom are a parent’s words to a child counted as foolishness. 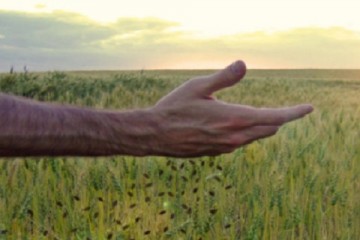 Alma’s (the younger) final words to his son Helaman were no different. Says he, to begin his counsel: “…for I swear unto you, that inasmuch as ye shall keep the commandments of God ye shall prosper in the land.” (Alma 36:1)

In the Book of Mormon, teaching a people how to “prosper in the land,” (in mortality) is one of the Book’s primary themes. Every story, principle, and experience of this sacred record is centered on this purpose—prosperity.

Continuing his remarks, Alma counsels: “I would that ye should do as I have done, in remembering the captivity of our fathers; for they were in bondage, and none could deliver them except it was the God of Abraham, and the God of Isaac, and the God of Jacob; and he surely did deliver them in their afflictions.” (Alma 36:2)

Alma’s original conversion in his youth was a profound realization of this eternal truth: that prosperity is tied to both learning about, and being incredibly thankful for the sacrifice of those ancestors who were faithful to God in their deliverance from bondage—or their deliverance from the ever grasping power of tyrannical government.

Alma continues to explain this to his son, “[H]e… delivered them out of bondage and captivity, from time to time even down to the present day; and I have always retained in remembrance their captivity; yea, and ye also ought to retain in remembrance, as I have done, their captivity.” (Alma 36:29) This is an oft-quoted theme of Alma’s ministry. In Alma 5, after detailing the Nephites’ bondage to King Noah, he asks the people:

In Alma’s time, a republic under the proper role of government was the result of their deliverance from King Noah.

What is Alma’s message to us at present day? Could it be that we should always retain in remembrance the sacrifice of our ancestors, including our Founding Fathers, and recognize their incredible achievements under the direction of, and obedience to, God?

Two-hundred and thirty-five years ago a group of rag tag colonists were up against the greatest army in the world. America had declared their independence in writing, yet the document meant nothing if they were to lose the war.

Yet they were out-gunned, out-trained and out-resourced. The odds were so lop-sided that while the Americans thought of England’s Army and Navy as the greatest on Earth, the British were calling the U.S. Continental Army “rebels in arms,” “parricides,” and “rabble on parade.”

But like the war stories of the Book of Mormon, God’s hand was revealed, and the colonists gained the strength of the Lord to once again achieve victory and restore the proper role of government, as in Alma’s day. And we are the beneficiaries of their sacrifice.

Yet have we forgotten their sacrifice and the width and breadth of their accomplishment?

To the people of Ammonihah Alma had this scathing reproof:

“Behold, O ye wicked and perverse generation, how have ye forgotten the tradition of your fathers…? And have ye forgotten so soon how many times he delivered our fathers out of the hands of their enemies, and preserved them from being destroyed…?” (see Alma 9:8-10)

It would seem that the longer our civilization exists from Adam, the more we should remember and be thankful for the mounting occasions in which our ancestors have sacrificed in bringing us not only freedom, but the restored gospel, from which the nutrients of that freedom has fertilized.

In the story of the Book of Mormon, the prosperity that continued under the proper role of government was later threatened by those who wanted to destroy freedom, because of their “love of glory and the vain things of the world.” (Alma 60:32)

Captain Moroni’s words in a letter to a treasonous government resembles Alma’s remarks to the people of Ammonihah:

The messages of the Book of Mormon were meant for our time, and “We have traveled far…” said President David O. Mckay, “…into the soul destroying land of socialism.”

It is my conviction that this nation shall endure, but it will endure on the backs of Latter-day Saints whose hearts both remember the sacrifice of our ancestors, and have enough love for our posterity to continue this precedence—who inspire, through word and action, this legacy of remembrance.

2 thoughts on “Have Ye Retained in Remembrance…?”