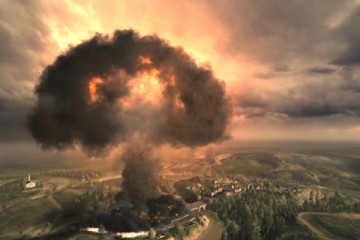 An In-Depth Examination of the Morality of Preemptive War

Author’s note: The propaganda required to motivate nations to war one against another is full of lies and inspires hate. I hope that as you personally explore our situation that you will seek council from the scriptures and from the Lord directly through the Holy Ghost. The spirit of contention is not from God. As it says in Ecclesiastes, there is a time and a season for war. If we get this right it will help us avoid being stained by the blood and sins of this generation.

This is the third article in a series of seven.

Can God Protect us from Nukes?

An In-Depth Examination of the Morality of Preemptive War

Less than ten years after failing to find WMD in Iraq, the spin machines are running round the clock to build a basis for war with Iran. It is almost a foregone conclusion that we will eventually invade. They want nukes and we don’t want them to get nukes. As I have debated this issue with numerous acquaintances, family members and friends, I’ve heard variations of this story several times. It is no straw man that I intend to beat. I’m guessing you have heard this story too.

The story goes something like this: If you were out on the street and you saw a man with a gun and you knew he was going to shoot you or your friends you would be justified to shoot him. In fact you would shoot him and take out the threat as quickly as you could. Wouldn’t you? You wouldn’t have to wait until he shot someone to take him out. That just wouldn’t be right. Would it?

There are several problems with making this analogy, however I admit it is pretty effective. It’s good propaganda when building a case against Iran. But it’s a completely inaccurate representation of the situation. By statute and by common law in order to be justified in using lethal force several criteria must be satisfied. (Statutes vary slightly by state.)

Conditions for Moral Use of Lethal Force

The Man with the Gun story could conceivably satisfy the conditions for moral use of lethal force. Here is an alternate and more accurate telling of the story: You are out on the street and someone comes up to you and tells you that the man over there has a gun. You can’t see the gun. This third party says that the man is going to shoot people. He says you should shoot him before he shoots you. That would be justified right?

This variation is more accurate because there is a third party who tells us about the guy with the gun. In our present day situation the third party could be any of several entities, namely the US Government, the United Nations, or the media (Fox or CNN or whoever). Let’s name the characters in our story. Let’s call this third party Foxy Roxy. She is an untrustworthy acquaintance. She owes you money. She is always trying to sell you something. She has previously tried to get you to break your marriage vows with her. She is volatile and unstable, but very attractive. You are very upset by about half of what she says. Yet you still spend time visiting with her almost daily because she is hypnotic and entertaining. After all, she does tell you some things that you like to hear.

Let’s call the alleged bad guy with the gun Vinny. Think of him as a swarthy guy whose family hails from somewhere near the Mediterranean Sea. You don’t hang out with Vinny. He’s different. He’s from a bad neighborhood.

Let’s introduce another charcter, Izzy. He’s also from near the “Med.” You like Izzy. You guys are buddies. Izzy is one tough character. He practices Krav Maga, a popular self defense system and is known for having thrown down on a few of the bullies in the neighborhood.

With these players in mind, the following story is far more analogous to current world affairs. One spring afternoon you are walking down the street minding your own business. Foxy Roxy runs up to you from behind and starts yelling. She points towards the intersection where you are headed. Across the street you see Izzy and Vinny engaged in a discussion. You can’t really tell if it is heated or not. Izzy and Vinny like to use their hands while they talk. Foxy says that Vinny has a gun and that he’s going to shoot Izzy. You ask her to calm down but she just keeps yelling. She says it will be too late if you don’t intervene soon, and Vinny might shoot you too.

I forgot part of the story. What Foxy meant to say was that she had heard through the grapevine that Vinny was planning to buy a gun (or maybe the parts to build one) and then shoot Izzy.

Oh … And I forgot to provide the description of your character. Many people on the block consider you a bully, but you stick up for the guys you like as best you can and think that’s fair because there are other bullies on the block. Who cares what people think right? It wouldn’t be such a problem except that unfortunately a few years back, Foxy Roxy caught you off guard in the same way as she has done today. She convinced you to shoot another guy from Vinny’s neighborhood. You did and he died. He was also a swarthy Mediterranean dude. Nobody really liked him. His name was Sam. Foxy said Sam had a gun but it turns out he didn’t have one. In fact he didn’t have much at all. He didn’t have much money and he was in poor health. You shot him anyway.

The reason for the retelling of the story is to show how easily the “imminence” of a situation can change. Ability, opportunity, and jeopardy are all required. In light of our moral responsibility to only engage in just and righteous dominion, and in light of the fact that nations must be held to a higher standard than individuals because of the broad impact of their actions, a moral people must require the clear satisfaction of the three commonly held criteria for imminence. Morality does not “adapt.” It is absolute.

As a nation, does the present-day threat posed by Iran satisfy the three criteria for an imminent threat? More importantly, who is verifying all this? Ability? No. No one can prove Iran is capable.Opportunity? Debatable. They are working on longer range missiles. Do we have jeopardy? We only have the word of our obviously corrupted media and government that the rhetorical statements of Iranian leaders constitute jeopardy. Jeopardy requires the other two criteria be satisfied simultaneously. Who is the aggressor? We initiated sanctions because they wouldn’t do what we want. We have encircled them with armies. We have threatened attack. We are in their neighborhood with guns and we have and are using them on their neighbors. If Iran were not preparing for war at this point they would be fools. How hypocritical are we that we take their preparatory efforts in their own lands and their own waters as unjustifiable and aggressive? We have created the situational equivalent of a hair trigger. All the better for our scheming leaders ifIran can be goaded into acting first. If Iran had adopted our definition of an imminent threat they would already have attacked us.

Dear reader, I hope that you will sincerely consider the gravity of the idea that we as a nation are making it a habit of acting prematurely, aggressively, disproportionately and without an imminent threat. It is my hope that some will read this and have a change of heart. I realize that many will take this line of thinking to be hard. We are free to choose, but we are not free to choose the consequences. If we follow correct principles and confess God’s hand he will support us. Not only is our temporal safety at stake, but also at stake are our eternal souls. I will end with Alma’s words to the church at Zarahemla. They are particularly relevant if we have been mistaken and have sullied our garments through our knee-jerk support of aggressive and offensive wars.

I say unto you, can ye think of being saved when you have yielded yourselves to become subjects to the devil? I say unto you, ye will know at that day that ye cannot be saved; for there can no man be saved except his garments are washed white; yea, his garments must be purified until they are cleansed from all stain, through the blood of him of whom it has been spoken by our fathers, who should come to redeem his people from their sins.

And now I ask of you, my brethren, how will any of you feel, if ye shall stand before the bar of God, having your garments stained with blood and all manner of filthiness? Behold, what will these things testify against you? Behold will they not testify that ye are murderers, yea, and also that ye are guilty of all manner of wickedness?

And now behold, I say unto you, my brethren, if ye have experienced a change of heart, and if ye have felt to sing the song of redeeming love, I would ask, can ye feel so now? Have ye walked, keeping yourselves blameless before God? Could ye say, if ye were called to die at this time, within yourselves, that ye have been sufficiently humble? That your garments have been cleansed and made white through the blood of Christ, who will come to redeem his people from their sins? Behold, are ye stripped of pride? I say unto you, if ye are not ye are not prepared to meet God. Behold ye must prepare quickly; for the kingdom of heaven is soon at hand, and such an one hath not eternal life.

3 thoughts on “Can God Protect us From Nukes?: Logical Fallacies”