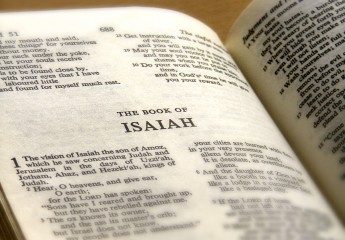 America’s place as head of the nations has always been a blessing pertaining to God’s covenant with his people Israel. If God’s people would keep the terms of his covenant, they would be the head of the nations, but if they broke his covenant they would be the tail (Deuteronomy 28:1, 13, 44). When America’s founding fathers established “one nation under God,” they resumed in modern times where ancient Israel left off. Although Israel broke God’s covenant and was exiled from its land, that didn’t mean God’s covenant was annulled. It simply waited for his people dispersed among the nations to again keep its terms and to be blessed of God. America’s extraordinary success and prosperity testify of that.

Additional blessings pertaining to God’s covenant include fruitfulness of the land, economic prosperity, peace in the land, numerous offspring, abundant domestic animals, full storehouses, admiration among the nations, resources to lend to other nations, and power over enemies (Deuteronomy 28:2–12). Curses or misfortunes pertaining to God’s covenant include the land’s poor yield, economic distress, a lack of peace in the land, dwindling offspring, meager domestic animals, empty storehouses, contempt among the nations, the need to borrow from other nations, subjection to aliens, plagues, pestilence, drought, disease, foreign invasion, captivity, dispossession, and starvation (Deuteronomy 28:15–68).

With Israel’s ancient exile among the nations, a new reality presented itself. While some Israelites such as the Jews retained their ethnic integrity, others, such as the birthright tribe of Ephraim, “assimilated among the nations” (Hosea 7:8; cf. Genesis 48:19). After being exiled from their land, Israel’s northern tribes migrated north from Mesopotamia. Taking counsel together, they traveled a year and a half’s journey beyond the River Euphrates (2 Esdras 13:40– 46). That would have taken them into eastern and western Europe, dispersing Israel’s lineages in those lands. Later, European migrations brought many to America, where the founding fathers sought to renew God’s covenant with Israel.

Over many generations, people in America lived by the Ten Commandments, the terms of God’s covenant. Only in recent times have we turned away from God. In fact, the same kind of wickedness that brought disaster on ancient Israel prevails in modern America. Today we observe every kind of social disorder and moral perversion, and when we live that way we will also see its consequence. What happened to God’s people in the past will happen to us: God will bring the curses of the covenant on the nation that rejects him. Just as we have enjoyed the blessings, so we will suffer the curses. The prophecy of Isaiah warns us as individuals even when it is too late to prevent trouble as a nation.

End-time America thus forms a composite of both ancient Israel and ancient Egypt in Isaiah’s prophecy. Today’s Jews don’t fit the description of the people of Israel caught in a spiritual downturn. Nor have the Jews been the “head of the nations” in modern times. And the State of Israel in the Middle East hasn’t been the focus of hostility from a militaristic superpower from the North. Only America fits these descriptions. Likewise, when Egypt’s inhabitants choose evil, turning to idols and becoming spiritually estranged, Egypt’s economy crashes and civil war sweeps the land. When Egypt’s politicians take matters into their own hands and mislead the nation, God empowers Assyria against them.

17 thoughts on “America in the Prophecy of Isaiah, Part 2”